This thread covers Earthquakes and volcanoes and disasters which can have enormous global consequences and can change the course of history. It will be a discussion on current seismic/volcanic hazards, risks of future hazards, preparedness and other scientific things.

For half the year, Yellowstone is largely inaccessible to geologists, buried under snow and ice and subject to fierce storms. By May, however, improved weather and melting snow opens the park to field work. The 2021 field season promises to be a productive one for the Yellowstone Volcano Observatory.

This past week saw the some of the first field work of the year by Yellowstone Volcano Observatory (YVO) scientists in Yellowstone National Park. The opening of the 2021 field season provides an opportunity to preview YVO’s plans for the next few months, before the snow starts accumulating once again and the field season ends in November.

Over the past several days, geophysicists installed about 15 semipermanent GPS stations around the park. These are low-profile sites that run on battery power with a small solar panel but that are not telemetered, so the data cannot be downloaded via radio. For the past 14 years the stations have been set up every May and picked up every October before they are snowed in, and the data downloaded and processed upon return to the office . The data aren’t useful for real-time monitoring, but they densify the existing continuous GPS network and can help scientists better understand processes like past episodes of uplift at Norris Geyser Basin.

https://www.usgs.gov/center-news/yvo-s- ... e_products
“People assume that time is a strict progression of cause to effect, but *actually* from a non-linear, non-subjective viewpoint - it's more like a big ball of wibbly wobbly... time-y wimey... stuff.” - Steven Moffat
Top

A new deep-ocean record has been set for a scientific drilling operation.

Researchers working off the coast of Japan lowered a giant piston corer through more than 8km of water in order to pull sediments from the seabed.

It took two hours and 40 minutes simply for the equipment to descend into position above the ocean floor.

The drilling exercise, mounted from the Research Vessel Kaimei, is part of a project to read the history of great earthquakes in the region.

The chosen core site in the Japan Trench is very close to the epicentre of the Magnitude 9.1, Tohoku-oki event in 2011, which also produced a tsunami that devastated communities on the nation's eastern seaboard, and knocked out the Fukushima nuclear plant.

The 37m of sediment retrieved by the piston corer will hopefully preserve details of much older quakes - those that occurred before any written accounts. 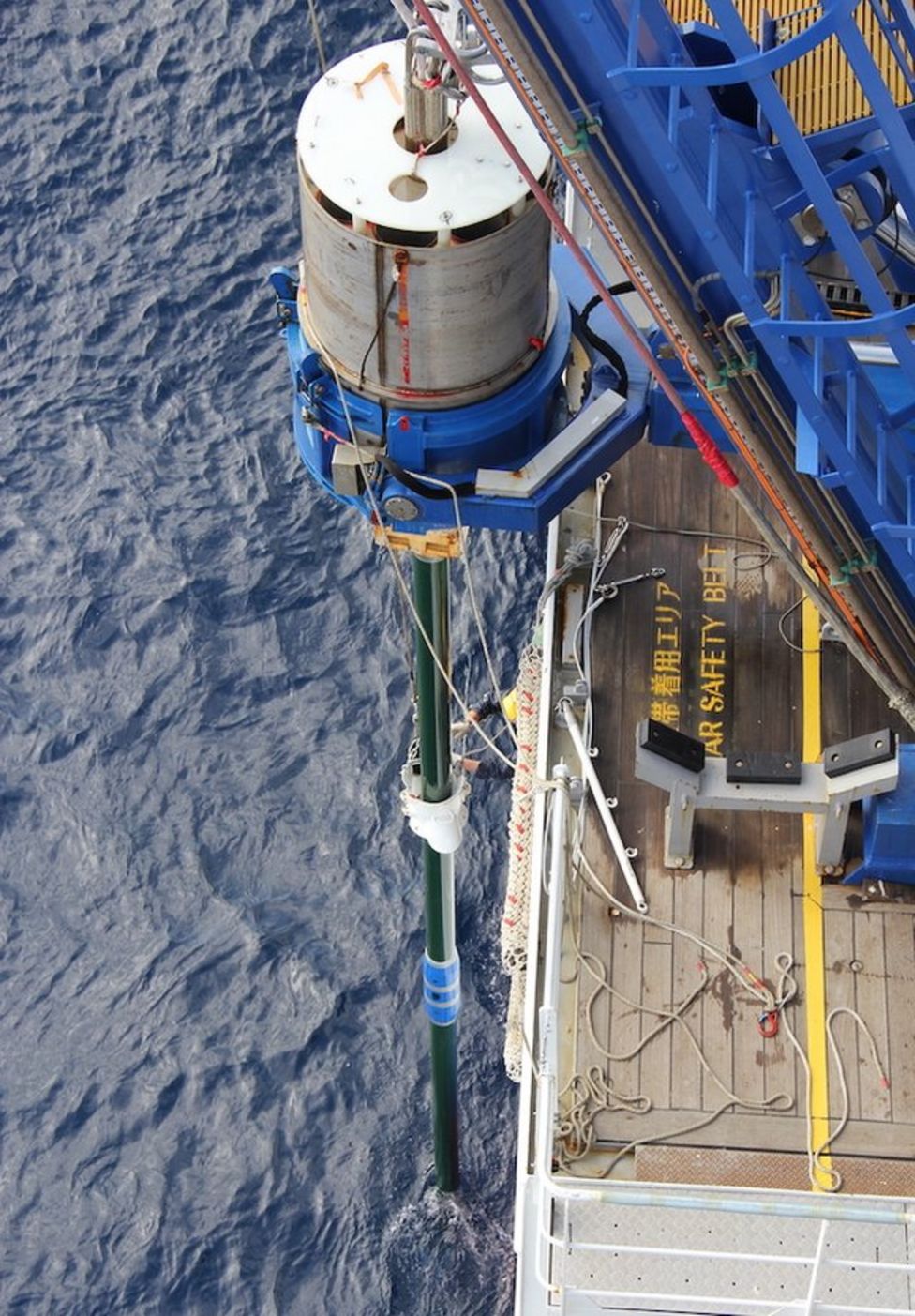 USGS geophysicist Jonathan Tytell said the agency expects “significant economic losses” and damage from the quake, but that it's centered in a mostly rural area. There were no immediate reports of deaths.

On Friday night, another strong, shallow earthquake shook an area of southwestern China near Myanmar causing at least one death.

The two quakes were not related, Tytell said.

https://www.independent.co.uk/news/seco ... 51962.html
“People assume that time is a strict progression of cause to effect, but *actually* from a non-linear, non-subjective viewpoint - it's more like a big ball of wibbly wobbly... time-y wimey... stuff.” - Steven Moffat
Top

Thousands of people have fled their homes in the Democratic Republic of Congo after a large volcano erupted.

Fountains of high lava burst from Mount Nyiragongo into the night sky forming a thick red cloud over the town of Goma, which has a population of two million.

The lava flow reached the city's airport but has reportedly now stopped.

During the early hours of Sunday, many residents headed across the nearby Rwandan border, while others went to higher grounds to the west of the city.

The USGS has registered 285 earthquakes by 21:24 UTC. The swarm is still in progress and new earthquakes are being registered every few minutes, sometimes 2 or 3 within 1 minute.

During an earthquake, Earth's crust moves, or slips, along fractures in rock called faults. These movements can be detected and recorded by geophysical instruments located at various locations on Earth's surface. Recordings from geophysical instruments have a different orientation relative to the earthquake's epicenter and therefore record a different aspect of a fault slip. An important problem in seismology is reconciling these different measurements to determine the true orientation of an earthquake's many fault slips, as well as the large-scale stresses that create them.

The process of determining the distribution of fault slips that creates a given set of geophysical observations is called slip inversion. In the computer era, it has traditionally been accomplished by a variety of least squares fitting routines that attempt to match possible slip distributions to the observed data. However, this technique faces a number of challenges, including ensuring a physically plausible solution, properly handling complex observational uncertainties, and determining a slip distribution that varies spatially.

(Courthouse News) Though the world’s oldest volcanoes erupt infrequently, those eruptions are larger and more dangerous than younger volcanoes’ emissions, according to a new review of the scientific literature on volcanic activity that reveals the how and why of our planet’s most explosive events.

The paper, published Tuesday in the scientific journal Nature Reviews Earth and Environment, contributes to scientists’ quest to accurately predict when volcanoes will blow, how frequently they will erupt and how dangerous these eruptions will be — knowledge that would come as a great help for the 800 million humans around the world who live near active volcanoes.

Most magma — the molten hot rock that flows like a fluid miles below the Earth’s surface — does not finish its journey from the inner earth to the planet’s surface, the researchers wrote.

“During its journey, magma can get trapped in reservoirs within the Earth’s crust, where it may stagnate for thousands of years and potentially never erupt,” said Meredith Townsend, an earth scientist at the University of Oregon who participated in the research, in a statement to the press.

Magma is called lava when it flows out from the planet’s depths and reaches the air, which cools the lava into “extrusive” igneous rocks such as basalt, obsidian and pumice.

For at least two millennia, small explosions have taken place about every 10 minutes at the Stromboli volcano north of Sicily.
(Photo by Luca Caricchi, UNIGE)
Top

(MSN) Authorities in the Philippines have started evacuating thousands of people after the alert status was raised on Thursday for a restive volcano that spewed a kilometre-high (0.62-mile) plume of gas and steam.

The alert for the Taal volcano, approximately 70km (45 miles) south of central Manila, moved from level 2 to level 3 on the 5-level scale, which the seismology and volcanology agency said meant a “magmatic intrusion” at the main crater “could further drive succeeding eruptions”.

In January last year, Taal shot a column of ash and steam as high as 15km (9.3 miles) into the sky, which forced more than 100,000 people to abandon their homes, causing widespread flight cancellations and heavy ash falls in Manila.

Authorities have warned that the current eruption could potentially be more hazardous than that of last year.

5.2 quake on Hawaii's Big Island felt as far away as Kauai
Source: AP

According to the U.S. Geological Survey, the quake hit less than 3 miles (5 kilometers) offshore of the northwest coast of the Big Island Monday. The earthquake was about 17 miles (27 kilometers) below sea level.

The epicenter was about 75 miles (120 kilometers) north of both Hilo and Kailua-Kona.

The USGS said people reported feeling some light shaking as far away as Kauai with strong shaking near the center on the Big Island. Shaking was reported on all the main Hawaiian Islands.

The quake had a depth of 10 kms (6.21 miles). There have been no reports of injuries or damages so far.