Energy & the Environment News and Discussions


Somebody should put "Flight of the Bumblebee" as an audio background to this story (see previous page).


TOKYO (AP) — A more than 40-year-old nuclear reactor in central Japan which suffered a deadly accident has resumed operation after being taken offline for a decade after the March 2011 Fukushima nuclear disaster, as Japan pushes to meet its carbon emissions reduction goal.

The reactor, which started operation in 1976, is one of Japan’s oldest. It’s one of three operated by Kansai Electric that were granted extensions to operate beyond their initial 40-year life, and is the first of the three to resume operation since meltdowns at the Fukushima nuclear power plant prompted extended safety checks and tougher standards at all Japanese reactors.

Some residents of Fukui and nearby areas filed a request for an injunction with Osaka District Court on Monday because of concerns about the aging Mihama No. 3 reactor.

Overfishing by Scandinavian boats in UK waters is threatening the puffin bird, according to wildlife conservation groups.

The Royal Society for the Protection of Birds (RSPB) has renewed calls for "urgent action" to curb the fishing practices of boats from countries such as Denmark and Norway.

Under EU quota arrangements that have continued through Brexit, fishing boats from abroad have an almost exclusive access to sand eel fishing off the UK coast.

The sand eel is the primary foodstuff of the puffin and other seabirds but its supplies have already been affected by climate change.

Conservationists say that warmer seas have led to a reduction in numbers near the coastline and they have warned that systematic overfishing is further depriving species, like puffins, already threatened with extinction.

https://news.sky.com/story/puffins-unde ... s-12342055
“People assume that time is a strict progression of cause to effect, but *actually* from a non-linear, non-subjective viewpoint - it's more like a big ball of wibbly wobbly... time-y wimey... stuff.” - Steven Moffat
Top

Twelve House Republicans joined Democrats in the chamber to pass a Congressional Review Act (CRA) resolution in a 229-191 vote. Because the Senate approved its version of the filibuster-proof measure in April, the resolution now heads to the White House, where President Joe Biden is expected to sign it.

"Friday's vote brings us one step closer to undoing the Trump administration's reckless assaults on vital climate and public health protections," Sierra Club deputy legislative director Mahyar Sorour said in a statement. "Now it is up to President Biden to sign this measure into law, and to build on these safeguards by instructing the EPA to act immediately to cut methane pollution from both new and existing oil and gas operations by 65% by 2025."

Given that the EPA's 2016 methane pollution safeguards only applied to newly permitted sources, Earthworks argued that "simply reinstating the Obama-era rules would not be enough for the Biden administration to meet climate goals." The environmental justice organization added that even if the Obama-era rules "were applied to existing sources," they "would only cut methane pollution by 20%."

The main vision is Carbon Capture, Utilization and Storage (CCUS) which is an emissions reducing technology that is currently being used in Canada and around the world. It captures the carbon before, during and after combustion and then either safely stores it or makes it available for use in products such as concrete. Our plan includes a trunkline connected to a carbon sequestration hub that allows connection for other sectors to use for emissions reductions.

London has rolled out its first hydrogen double-decker bus 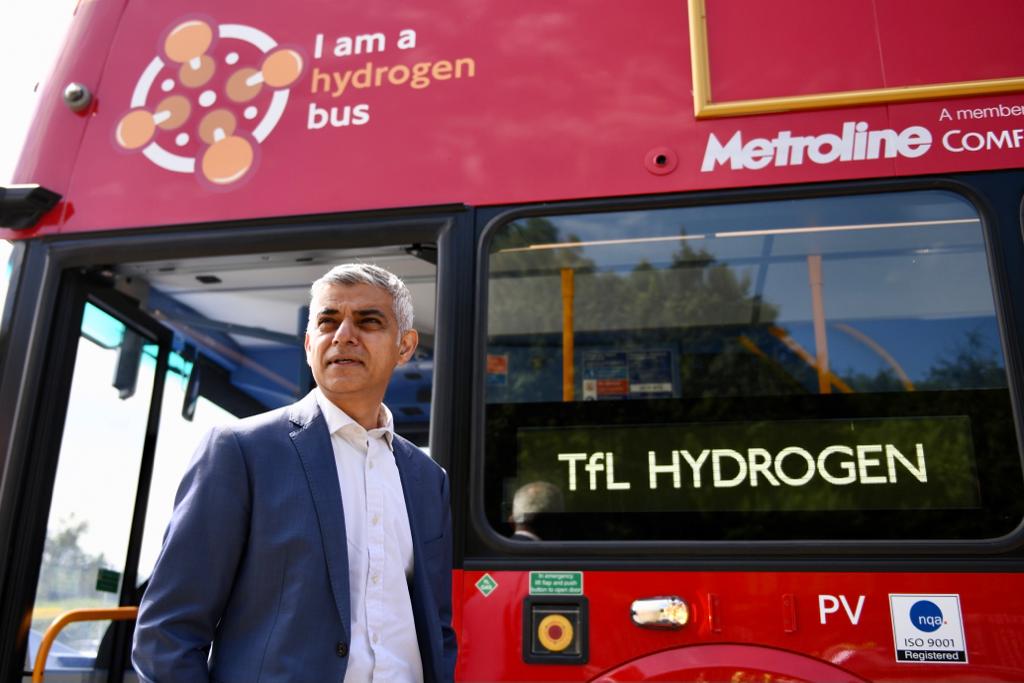 The 20 new buses join the 500 electric and 3800 hybrid buses already in service as part of efforts to improve the city’s air quality, as well as to make all of London buses zero emission by 2030.

Khan touted the vehicles’ benefits, saying in a tweet: “These hydrogen-powered double-decker buses don’t produce exhaust fumes. Not only will they help clean up London’s air but they’ll give Londoners quieter, smoother journeys.”

https://qz.com/2024770/hydrogen-fuel-ce ... ords-plan/
“People assume that time is a strict progression of cause to effect, but *actually* from a non-linear, non-subjective viewpoint - it's more like a big ball of wibbly wobbly... time-y wimey... stuff.” - Steven Moffat
Top


The Supreme Court ruled Tuesday that the PennEast pipeline can seize land from the state of New Jersey for its construction, a win for the natural gas vessel.

The 5-4 decision wasn't split along ideological lines in the case that pitted fossil fuel interests against states' rights.

The five justices rejected New Jersey's argument that the pipeline company taking its land violated its sovereign immunity protecting it from lawsuits, including property condemnation suits, and argued that the state gave up its ability to evade eminent domain by ratifying the Constitution.

The Ministry of Energy has announced that a new US$380 million project to enhance the performance of the National Electric Grids of Uzbekistan (NEGU) has been approved by the World Bank’s Board of Executive Directors.

The Electricity Sector Transformation And Resilient Transmission Project will ensure reliable energy is supplied to millions of households and businesses across Uzbekistan. It is supported by US$380 million in credit from the International Development Association (part of the World Bank Group), and a US$43 million loan from the Green Climate Fund (GCF) under the Sustainable Renewables Risk Mitigation Initiative Facility.

The government of Uzbekistan will receive this financing at very low interest rates and a long repayment period, of up to 40 years. The GCF will also provide a US$4 million grant to cover selected project activities.

The project aims to support Uzbekistan in its clean energy transition by improving the transmission network’s capacity to integrate renewable energy produced by the private sector. It will:

The UK government has brought forward the ban on the use of unabated coal by a year, so that from 1 October 2024, Britain will no longer use coal within its energy system.

Energy and climate change minister Anne-Marie Trevelyan announced the change ahead of a Powering Past Coal Alliance (PPCA) Europe roundtable meeting today. It follows significant progress in moving the UK away from the fossil fuel in recent years, with just 1.8% of the energy mix coming from coal in 2020, as opposed to 40% a decade ago.

The government launched a consultation in February 2020 on the possibility of bringing forward the phase-out date for coal generation forward from 2025. Since then, more coal power plants have continued to shutter with EDF announcing in March that its West Burton A station will close in September 2022. This follows Drax’s two remaining coal plants closing in March 2021, and SSE's last coal-fired power station, Fiddler’s Ferry, and RWE's Aberthaw B coal-fired power station, both closing in March 2020.

A water disinfectant created on the spot using just hydrogen and the air around us is millions of times more effective at killing viruses and bacteria than traditional commercial methods, according to scientists from Cardiff University.

Reporting their findings today in the journal Nature Catalysis, the team say the results could revolutionize water disinfection technologies and present an unprecedented opportunity to provide clean water to communities that need it most.

Their new method works by using a catalyst made from gold and palladium that takes in hydrogen and oxygen to form hydrogen peroxide—a commonly used disinfectant that is currently produced on an industrial scale.

Over four million tons of hydrogen peroxide are made in factories each year, where it is then transported to the places it is used and stored. This means that stabilizing chemicals are often added to the solutions during the production process to stop it degrading but these reduce its effectiveness as a disinfectant.