It's shocking to see Climate Change happening in front of you.
“People assume that time is a strict progression of cause to effect, but *actually* from a non-linear, non-subjective viewpoint - it's more like a big ball of wibbly wobbly... time-y wimey... stuff.” - Steven Moffat
Top 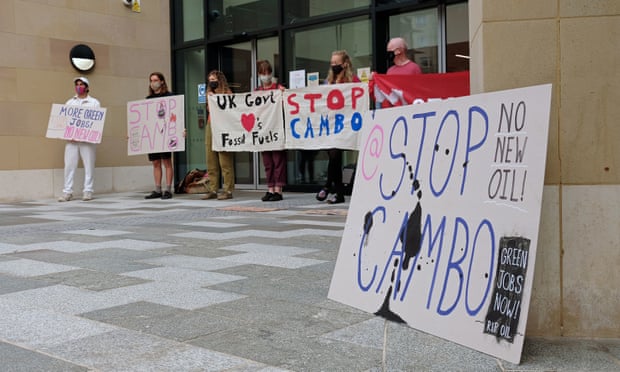 The government faces the threat of legal action over plans to allow exploration at the Cambo oilfield near Shetland after promising to put an end to new oil exploration licences that do not align with the UK’s climate goals.

Greenpeace has threatened to take the government to court over the decision, which has triggered an outcry from climate experts and green campaigners in Scotland and across the UK in recent weeks.

In a letter to the business secretary, Kwasi Kwarteng, the green group urged the minister not to rubber-stamp a permit for the Cambo oilfield, which could produce 170m barrels of oil and produce emissions equivalent to 16 coal-fired power plants running for a year.

The approval would risk undermining the UK government’s recent decision to bar new oil exploration licences unless the oil driller can pass a “climate checkpoint” test that proves the fossil fuel is needed and can be produced with as small a carbon footprint as possible.

The Cambo project will not face the same scrutiny in part because it would be an extension of an existing oilfield owned by the private equity-backed oil explorer Siccar Point. UK’s climate change minister, Anne-Marie Trevelyan, said last month in a parliamentary committee meeting that Cambo was “not a new licence, there are no new licences this year”.

https://www.theguardian.com/business/20 ... tion-plans
“People assume that time is a strict progression of cause to effect, but *actually* from a non-linear, non-subjective viewpoint - it's more like a big ball of wibbly wobbly... time-y wimey... stuff.” - Steven Moffat
Top

I’m not saying the drought in the western US isn’t real, it is. But it would help dramatically and perhaps even be manageable if Americans weren’t so wasteful, both industry and citizens. Dropping the obsession with lawns, mandating reclamation of water on farms instead of permitting excessive soil runoff and other things could be done but simply aren’t.
Top

erowind wrote: ↑Fri Jul 23, 2021 8:27 pm I’m not saying the drought in the western US isn’t real, it is. But it would help dramatically and perhaps even be manageable if Americans weren’t so wasteful, both industry and citizens. Dropping the obsession with lawns, mandating reclamation of water on farms instead of permitting excessive soil runoff and other things could be done but simply aren’t.

Yeah, it's more likely they don't want to give up their luxurious water consumption, so they'd rather dig deeper into debt by constructing environmentally harmful desalination plants along the coasts and transport filtered water inland. We've never been ones for efficiency, especially when it comes to our natural resources.
To know is essentially the same as to not to know. The only thing that occurs is entropy.
Top

Bipartisan Measure to Boost Carbon Credits May Be In Reconciliation Package
by Sara Sirota and Ryan Grim
July 21, 2021

(The Intercept) A BIPARTISAN MEASURE to boost carbon credit markets is a “prime contender” to be in the Democrats’ $3.5 trillion reconciliation package, Sen. Sheldon Whitehouse, D-R.I., told The Intercept. But its inclusion in the simple-majority process would put Senate Budget Committee Chair Bernie Sanders, I-Vt., and other critics in the awkward position of supporting a bill they already voted against.

The Growing Climate Solutions Act, or S. 1251, aims to help farmers and foresters more easily participate in carbon credit markets. It would establish a program at the Department of Agriculture to certify technical experts who can assist landowners implementing carbon capture, emission-reduction measures, and other sustainability methods by planting fast-growing crops such as hemp. Championed by Whitehouse and Sen. Debbie Stabenow, D-Mich., the Growing Climate Solutions Act has received the endorsement of the American Farm Bureau Federation and Environmental Defense Fund and passed the Senate in a 92-8 vote just last month.

Sanders, along with Sens. Cory Booker, D-N.J.; Ed Markey, D-Mass.; Jeff Merkley, D-Ore.; and Elizabeth Warren, D-Mass., voted against the bill. Broadly speaking, opponents argued that the measure was at best a distraction from the necessary work of reducing emissions and at worst could prolong the strength of the fossil fuel industry. “I don’t believe that an offset system that subsidizes corporations’ continued pollution in front-line communities is the best strategy,” Merkley said at the time of the vote. “Let’s set incentives that reduce pollution in both agriculture and front-line neighborhoods.”

Advocates of the bill argue that time has run out, and Democrats can’t afford to leave any tool that could reduce carbon concentration on the sidelines. Carbon concentration has reached 418 parts per million, well over the 350 ppm that scientists say is a threshold the planet needs to remain under.

We documented last week Brazil had some of the worst frost conditions in two decades. Temperatures dropped below zero and delivered a massive blow to farmers across the country's coffee belt. The result has been sky-high coffee prices.

Back-to-back heatwaves continue to scorch the Earth across the Western half of the U.S. The corn belt, which spans the Midwest, lacks rainfall, and hot weather could negatively impact crop development, leading to an underwhelming harvest.

"All of these events are touched by jet streams, strong and narrow bands of westerly winds blowing above the Earth's surface. The currents are generated when cold air from the poles clashes against hot air from the tropics, creating storms and other phenomena such as rain and drought," Bloomberg said...........

14,000 scientists warn of "untold suffering" if we fail to act on climate change

There are some phrases that should stop you in your tracks. The warning of a future that holds "untold suffering" is one of them. That is exactly what scientists from around the world are cautioning will happen if we don't take the threat of climate change seriously. In a paper published Wednesday in the journal BioScience, more than 14,000 scientists from 153 countries signed their name to research that warns of an incoming climate emergency.

The paper, led by researchers from Oregon State University, uses 31 different planetary variables that tell us how Earth is holding up in the face of humanity's insistence on draining natural resources and pumping greenhouse gases into the atmosphere. The list of checks includes surface temperature levels, rainforest health, and glacial ice levels, along with directly human-controlled factors like the health of the global economy and the availability of fossil fuel subsidies.

If you think of each of those indicators as a vital organ in the Earth's body, you won't be thrilled to hear that a majority of those organs are careening toward failure.


The Greenland Ice Sheet is the second largest mass of freshwater ice on the planet, second only to Antarctica.

Greenland's ice sheet has experienced a "massive melting event" during a heatwave that has seen temperatures more than 10 degrees above seasonal norms, according to Danish researchers.

Since Wednesday the ice sheet covering the vast Arctic territory, has melted by around eight billion tons a day, twice its normal average rate during summer, reported the Polar Portal website, which is run by Danish researchers.

And Nerlerit Inaat airport in the northeast of the territory recorded 23.4 degrees on Thursday, the highest recorded there since records began.