To reduce global greenhouse gas emissions we need to shift towards a low-carbon energy system. Large reductions in the cost of renewable technologies such as solar and wind have made them cost-competitive with fossil fuels. But to balance these intermittent sources, and electrify our transport systems we also need low-cost energy storage. Lithium-ion batteries are the most commonly used.

In this article I show that lithium-ion battery cells have also seen an impressive price reduction. Since 1991, prices have fallen by around 97%. Prices fall by an average of 19% for every doubling of capacity. Even more promising is that this rate of reduction does not yet appear to be slowing down. 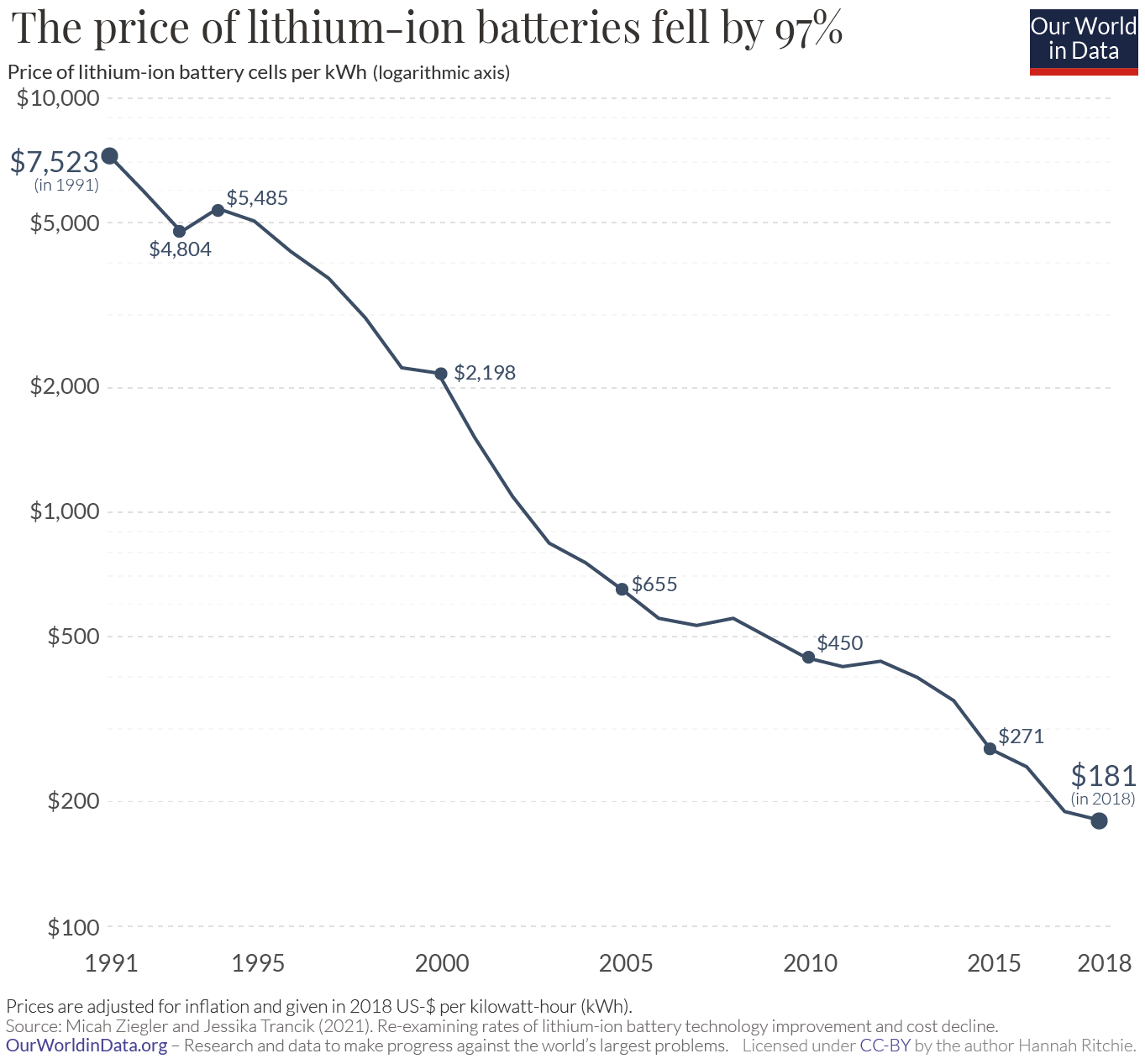 Research between the University of Liverpool, UK and National Tsing Hua University (NTHU), Taiwan has revealed a new charge storage mechanism that has the potential to allow rechargeability within calcium-air batteries.

In a paper published in the journal Chemical Science, Professor Laurence Hardwick from the University of Liverpool's Stephenson Institute for Renewable Energy (SIRE) and colleagues discovered a distinctive form of charge storage at the electrode interface described as trapped interfacial redox. This new finding introduces a new mechanism of charge storage that could be harnessed in practical devices.

Lead author of the paper, Yi Ting (Leo) Lu, is a joint Ph.D. student in the dual Ph.D. program between the University of Liverpool and National Tsing Hua University. He said, "We started investigating these electrolyte systems as part of understanding how to develop a metal-air battery based upon calcium metal, which is a highly abundant earth element, creating a highly sustainable battery technology."

CATL chairman Robin (Yuqun) Zeng said the firm would start marketing sodium-ion batteries as early as late July, 2021. CATL is the largest producer of batteries in the world.

Shares of Shandong Sacred Sun Power Sources (002580:SZ) and Inner Mongolia Lantai Industrial (600328:SH) soared by the maximum 10% in the morning trading on May 24. The two firms are key material providers essential to the domestic sodium-ion battery supply chain.

“Sodium-ion cells have a lower energy density, ~100-150Wh/kg, in comparison to lithium-ion cells’, 330Wh/kg,” says James Frith, head of energy storage at BloombergNEF, “So expect them to be used to replace lead-acid initially, in applications such as back-up power and two and three-wheelers.

“In the long run, stationary storage markets could be suitable for sodium-ion deployments.”

(Chalmers) Imagine an entire twenty storey concrete building which can store energy like a giant battery. Thanks to unique research from Chalmers University of Technology, Sweden, such a vision could someday be a reality. Researchers from the Department of Architecture and Civil Engineering recently published an article outlining a new concept for rechargeable batteries – made of cement.

Researchers have increased the lifetime of a promising electric vehicle battery to a record level, an important step toward the goal of lighter, less expensive and long-lasting batteries for future electric vehicles. The work is reported June 28 in the journal Nature Energy.

Such batteries—the goal of research groups the world over—are seen as an important part of the solution to reduce the effects of climate change, and scientists are exploring a dizzying array of options.

One solution on the horizon is a lithium-metal battery for electric vehicles. These batteries hold almost twice the energy of their widely used lithium-ion counterparts, and they're lighter. That combination offers the enticing prospect of an electric vehicle that would be lighter and go much farther on a single charge. But lithium-metal batteries in the laboratory have been plagued by premature death, lasting only a fraction of the time of today's lithium-ion batteries.

One particularly promising architecture for next-generation batteries uses pure lithium-metal, a material with excellent energy density that could see electric vehicles travel many times farther on each charge. A research group in the US has taken a significant step forward with this technology, coming up with a design for a long-lasting lithium metal battery that remains functional for a record-breaking number of charging cycles.

The idea behind these types of batteries is to swap out the graphite used in the anode component for pure lithium metal, which can hold as much as 10 times the energy. Described as a dream material by some researchers, lithium metal is seen as key to helping us break through a key bottleneck in energy storage, but scientists have struggled with longevity issues with the versions developed so far failing quickly during use.

Europe's largest battery storage project – and the first to reach 100 megawatts of capacity – has begun operations at Minety in Wiltshire, UK. By Russell Gold | Photographs by Philip Keith for The Wall Street Journal
Updated July 22, 2021 8:29 am ET

A four-year-old startup says it has built an inexpensive battery that can discharge power for days using one of the most common elements on Earth: iron.

Form Energy Inc.’s batteries are far too heavy for electric cars. But it says they will be capable of solving one of the most elusive problems facing renewable energy: cheaply storing large amounts of electricity to power grids when the sun isn’t shining and wind isn’t blowing.

The work of the Somerville, Mass., company has long been shrouded in secrecy and nondisclosure agreements. It recently shared its progress with The Wall Street Journal, saying it wants to make regulators and utilities aware that if all continues to go according to plan, its iron-air batteries will be capable of affordable, long-duration power storage by 2025.

Form is preparing to soon be in production of the “kind of battery you need to fully retire thermal assets like coal and natural gas” power plants, said the company’s chief executive, Mateo Jaramillo, who developed Tesla Inc.’s Powerwall battery and worked on some of its earliest automotive powertrains.

A new startup is claiming it can deliver a dramatic improvement over existing battery designs. Stories like this often elicit rightful skepticism from readers. While battery technology absolutely improves over time, virtually all of that improvement comes from enhancements to existing Li-ion chemistry rather than brand-new ideas. That’s actually one reason why this announcement might lead to something: The underlying battery chemistry is already known to work and the company behind it, Form Energy, is targeting a specific industrial application: grid-scale batteries.

Form Energy recently gave The Wall Street Journal access to its executives and engineers, but the company isn’t in full production yet. It’s headed by Mateo Jaramillo, a former Tesla executive who was Director of Powertrain Business Development from 2009-2014 and became Director of Tesla Energy in that same year. Jaramillo founded Form Energy in 2017 with the goal of developing a battery that would help decarbonize the electrical grid.

“We have added a molecule spacer on one side of the graphene layer. When the layers are stacked together, the molecule creates larger space between graphene sheets and provides an interaction point, which leads to a significantly higher capacity,” says researcher Jinhua Sun at the Department of Industrial and Materials Science at Chalmers and first author of the scientific paper, published in Science Advances.