(FreshFruitPortal.com) In Oregon, advocates urged state officials to institute emergency rules to protect workers following a farmworker's death after he completed a shift outside during the heatwave in late June, US News reports.

Gov. Kate Brown on July 6 directed the state's Occupational Safety and Health Administration to put emergency rules in place for employers, including requiring employers to provide shade, cool drinking water and regular breaks for employees, among other regulations.

In other states, worker protections during extreme heat are already in place. California, considered the national leader on the issue, has a statewide occupational heat illness prevention standard that includes training and planning, along with requirements for providing water, shade and breaks for those who work outside.
…
But members of the United Farm Workers noted in a statement that …(Washington) state's protections fell short of California's, urging Gov. Jay Inslee to issue additional emergency protections.
...
On July 13, additional rules took effect in Washington, requiring shaded areas for employees to cool down and ensuring that workers have a paid rest period of at least 10 minutes every two hours to cool down.

The remainder of the article includes reviews of the impact of the heat on the apple crop, cherries, and berries.
Top

(The Intercept) IN THE WAKE of an extreme heat event in the Pacific Northwest that killed at least 200 people, a scientist testified before Congress that the deaths could have been prevented.

“Those who died lacked access to financial capital, social networks, and had aging or injured bodies,” Vivek Shandas, director of the Sustaining Urban Places Research Lab at Portland State University, told the House Science, Space, and Technology Committee. To Shandas, the tragic result was not unforeseen.

“We knew who was going to die,” the scientist said. “I wrote a report stating as much in 2009, and yet local agencies had little capacity for taking swift action.”

Shandas is part of a league of scientists that could be called the Cassandra generation, named for the Greek myth about unheeded prophecies. For decades, scientists have predicted a moment like the one we’re living now: climate-driven crises destroying lives and beloved places once assumed safe from catastrophes like extreme heat waves. Scientists like Shandas saw it coming, yet little action was taken.

“It’s very clear,” he (Aaron Bernstein, interim director of Harvard’s Center for Climate, Health, and the Global Environment) said, “that the single best thing we can do to address all of the above is to prevent greenhouse gas emissions in the first place.”

Low income folks may be on the front lines of those suffering from extreme weather. Still, the worse the weather gets, the more likely it will become more than just an inconvenience to the middle class
Top

(CNN) A weakening In-fa is beginning to track away from the southern Japanese islands but has its eye set on eastern China by the end of this weekend. The storm could bring extremely heavy rainfall to millions in China.

And behind In-fa, there is a growing tropical threat from newly named Tropical Storm Nepartak for northern and central parts of Japan, which could potentially impact the Olympic Games by early next week.

In-fa is currently located about 275 kilometers (170 miles) west-southwest from Okinawa and is moving northwest. The storm has been a typhoon for much of this week but has now weakened to a strong tropical storm, with winds up to 110 kph (70 mph) near its center, as of the 5 p.m. ET update from the Joint Typhoon Warning Center.

In-fa has been weakening due to dry air, thus weakening its thunderstorms, as well as slightly cooler sea surface temperatures.

The good news is no significant strengthening of this storm is expected because of this. But it will still be a strong tropical storm or weak hurricane impacting land in the northwest Pacific Ocean.

Monsoon rains could bust exceptional drought across the Southwest

(CNN)A surge of monsoonal moisture is bringing rounds of heavy rain and strong thunderstorms to areas of the Southwest that are currently suffering from extreme to exceptional drought conditions.
Nearly 10 million people are under flash flood watches across Arizona, Colorado, New Mexico and Utah.
While expansive rain and thunderstorms will affect much of the Southwest this weekend, the highest rainfall totals are expected across the state of Arizona where some locations could tally upwards of 6 inches. This amount of rain in such a short period of time have prompted significant flash flooding concerns.

The EF-1 tornado with winds estimated at 100 miles per hour (161 kilometers per hour) touched down in Oakland County around 7:45 p.m., the weather service said Sunday. Trees were uprooted and snapped, and one person suffered minor injuries after multiple pine trees fell on a home. The tornado traveled about 1.8 miles (2.90 kilometers).

Thousands of utility customers in the Detroit area had no power Sunday following a night of severe storms.

DTE Energy reported nearly 135,000 customers in Oakland and Macomb counties had no service at 10:20 a.m. due to wind damage.

Experts Say Climate Change is to Blame for Unprecedented Heat Waves Worldwide, and There’s No End in Sight

(Courthouse News) In a study published Monday in Nature Climate Change, experts say that severe climate change happening across the world is increasing the likelihood that these massive heat waves will happen. Researchers found that it is not the amount of warming itself but the rate at which the warming takes place that really sets the stage for these extreme weather events.

Researchers used a series of complex climate data models and analysis techniques to look for correlations between climate change and surging temperatures. Using these models, experts were able to run through different possible outcomes for the planet that changed depending on the amount of emissions experts projected under each scenario.

What they found was under the high carbon emissions scenario, the probability of experiencing heat waves is likely to skyrocket in the coming years. According to their models, record heat waves lasting more than a week are going to be two to seven times more likely between now and 2050.

And experts say it doesn’t get any better from there. Between 2050 and 2080, just under 60 years from now, experts project heat waves will be three to 21 times more likely than they have been in recent decades.

Researchers also found that heat waves seem to be linked with the ebb and flow of climate change acceleration, with heat waves being more likely to happen in spurts during times of fast-paced climate warming but then slow down when climate warming is less aggressive.

Extreme weather will be the norm and UK is not prepared, scientists warn 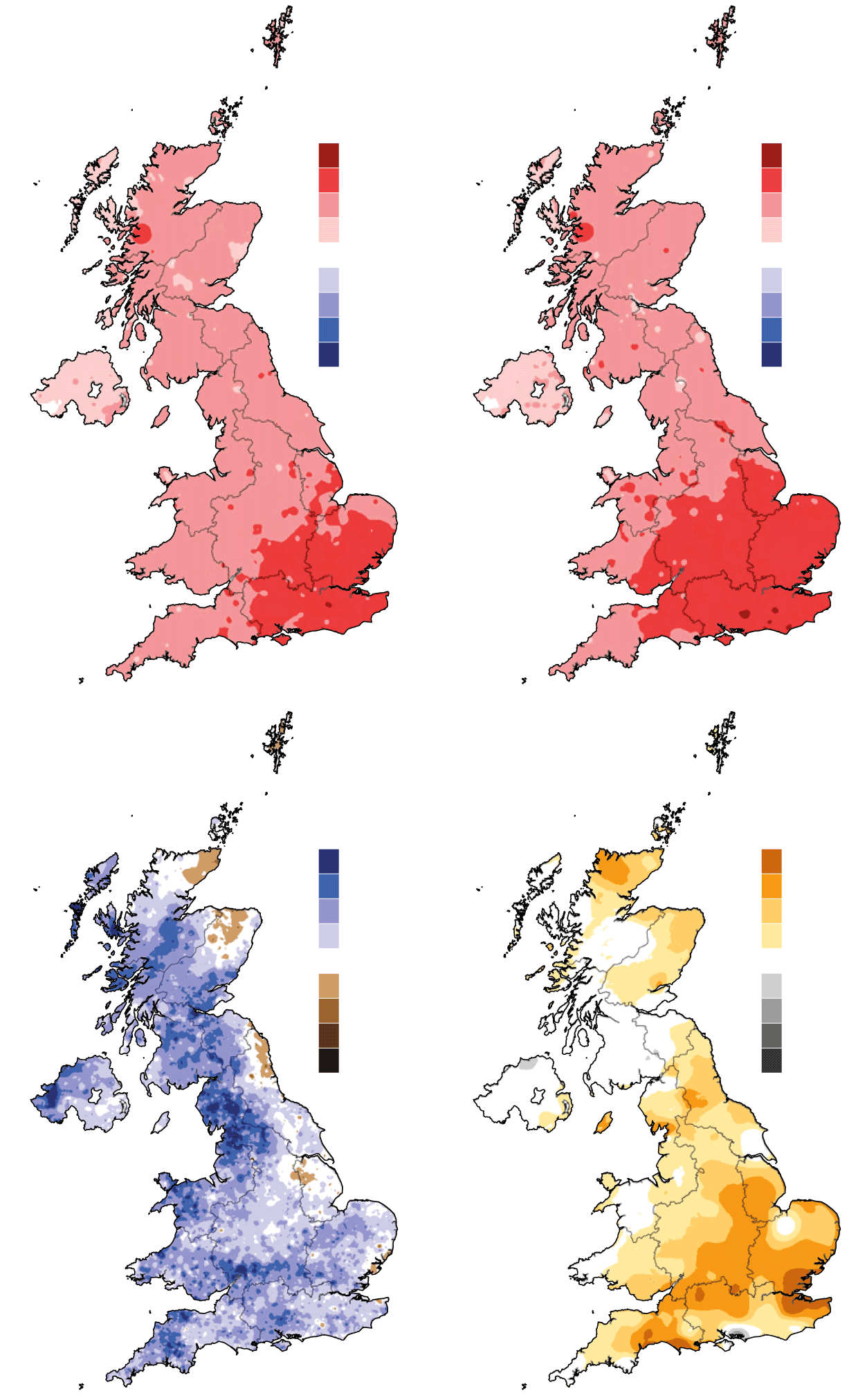 Extremes of weather will strike the UK more frequently owing to the climate crisis, scientists said after data showed that last year was one of the warmest, as well as one of the wettest and sunniest, on record.

Last year was the first to figure in the top 10 for heat, rain and hours of sunshine, in records stretching back more than a century, as moderate British weather is rapidly becoming a thing of the past, according to a report from the Met Office and climate scientists.

The extremely sunny start to lockdown in the spring of 2020 followed the wettest February, while a heatwave striking in August combined to make 2020 the third warmest year, the fifth wettest and the eighth sunniest on record, according to the State of the UK Climate 2020, published in the International Journal of Climatology.

Mike Kendon, senior climate scientist at the Met Office National Climate Information Centre, and lead author of the study, said: “The UK’s climate is already changing. The warming that we see is broadly consistent with what we see globally … and our climate seems to be getting wetter as well as warmer, and that’s consistent with our broad understanding of the process [of climate change].”

The UK’s weather records go back centuries in some cases, with a temperature series for central England dating to 1659 and other temperature records in an unbroken line from 1884, and rainfall going back to 1862, and in some cases further. The report’s authors amalgamated data from these series, and for sea temperatures and sea levels, and compared them with last year’s findings.

https://www.theguardian.com/world/2021/ ... port-warns
“People assume that time is a strict progression of cause to effect, but *actually* from a non-linear, non-subjective viewpoint - it's more like a big ball of wibbly wobbly... time-y wimey... stuff.” - Steven Moffat
Top 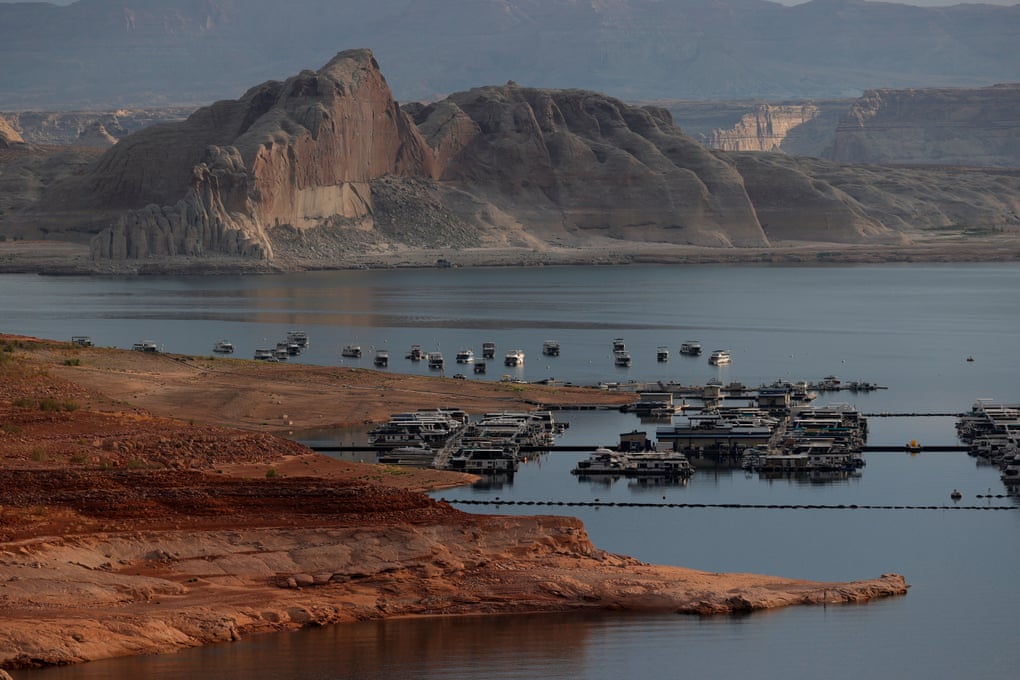 At Lake Powell on the Arizona-Utah border, the water line has dropped to a historic low, taking a heavy toll on the local industry

Chaos erupted at Bill West’s business in Page, Arizona, last week when he was forced to tell dozens of paid clients their summer vacations were either canceled or on hold – effective immediately.

West, the owner of a houseboat timeshare company, was scrambling after record-low water levels at Lake Powell – one of the most popular motorized boating destinations in the US – disrupted recreational and tourism activities throughout the region.

The National Park Service abruptly announced earlier this month that houseboats could no longer use the Wahweap Launch Ramp, the busiest boat launch site in the area. Boats already cast out into the water were warned they had less than a week to return to land, or risk getting marooned.

West sat in traffic for more than an hour last Friday trying to corral 30 of his houseboat timeshares from the 180-mile long reservoir before the final deadline. Dozens of vehicles stretched for at least a mile waiting for their turn on a concrete ramp that no longer reached the water. Even four-wheel-drive trucks were getting stuck in the mud as the Lake Powell shoreline retreated faster than federal water managers expected.


(CNN)The dire drought that has been smothering much of the West for months got even worse this week, with areas in California and the Pacific Northwest seeing an expansion of drier conditions, which have fueled menacing wildfires across the region.

"There isn't a 'normal' anymore. We need to be prepared for anything," said Norm McDonald, the Incident Commander for the Bootleg Fire in Oregon, the nation's largest that was ignited in early July and was only 53% contained by Thursday.

Nearly half of California is currently suffering exceptional drought, which is the worst category designated by the US Drought Monitor.

Last week, a little over a third of the state was under that category. Now, nearly 14.5 million people are impacted, a more than 50% increase from last week, according to the monitor, which is produced through a partnership between US government agencies and the National Drought Mitigation Center at the University of Nebraska-Lincoln.