by weatheriscool
Lets talk about wild fires and there impact on human lives.

by weatheriscool
Rocky mountain forests now burning more than any point in past 2,000 years
https://phys.org/news/2021-06-rocky-mou ... years.html
by University of Montana

Philip Higuera, a University of Montana professor of fire ecology (right), and his team examine a lake-sediment core from Chickaree Lake in Colorado's Rocky Mountain National Park. The core is used to reconstruct fire and vegetation history over thousands of years. Credit: Grace Carter

Following 2020's extreme fire season, high-elevation forests in the central Rocky Mountains now are burning more than at any point in the past 2,000 years, according to a new University of Montana study set to publish in the Proceedings of the National Academy of Sciences.

Researchers from UM and the University of Wyoming analyzed a unique network of fire-history records to understand how 21st-century fire activity compares to wildfires in the past. The findings highlight that burning in recent decades in high-elevation forests of northern Colorado and southern Wyoming is unprecedented over the past several millennia.

As fire paleoecologists—scientists who study historical ecosystems—the team uses charcoal found in lake sediments to piece together the fire history of forests across the Rocky Mountains. The idea, said lead author and UM professor Philip Higuera, is that understanding the past is key to understanding changes we see today and how forests may change in the future.

(Mother Jones) For 16 years, Ashley Diaz has lived in Happy Camp, a census-designated place with a population of about 1,000 along the Klamath River in Northern California. One evening last September, the seven-months pregnant mom of three was resting when neighbors came by to warn her about a nearby wildfire.

She quickly started evacuating, grabbing sippy cups and formula, her phone, and her dad’s ashes on her way out the door, even as her family told her she was overreacting. And without time to put on a pair of shoes or secure her daughter in a car seat, Diaz drove out of town. When she returned, she had lost everything in the blaze, later named the Slater fire.

“If we were in the house sleeping for about 20 minutes longer, it would have got to us,” Diaz recalls.

“With peak wildfire season approaching during a severe drought in the Western United States, activists and government officials are concerned about what this season may bring. California Gov. Gavin Newsom called for a record $2 billion wildfire preparedness budget and an expansion of its fleet of aircraft to combat wildfires in a meeting with the head of the California Department of Forestry and Fire Protection in May.

But climate activists are calling for more to be done for neighborhoods at high risk of burning down. In some regions of California, many residents are unable to afford home insurance. Sometimes, companies avoid insuring homeowners living in areas where wildfires are especially damaging. In Happy Camp, after the Slater fire, many residents who lacked insurance—including members of the Karuk tribe—were left homeless.

by caltrek
California’s Fire-Fanning Santa Ana Winds May Not Get Any Better With Climate Change
by Paul Voosen
June 18, 2021

(Science) The howling hot Santa Ana winds that funnel into Southern California every fall are a fixture of the West Coast experience. Underneath cloudless skies, winds arrive from the high desert mountains to the east, sending temperatures soaring, hollowing out ocean waves, and, so the stories go, turning human behavior erratic. The dry winds also fan the region’s deadliest wildfires, including one of the largest in California’s modern history, burning land nearly equal in size to Los Angeles itself.

Until recently, the future of the Santa Ana winds was thought to be one of the few good-news stories of climate change. Scientists had predicted rapid inland warming would weaken one of the winds’ primary drivers and reduce their frequency. But a new study is casting doubt on that projection, finding that bouts of hot Santa Ana winds are not declining. They could even be increasing.


LAS VEGAS (AP) — The Southwest U.S. continued to bake Saturday, and weather forecasters kept warnings in effect for excessive heat in Arizona, Nevada and desert areas, at least through the weekend.

High temperature marks didn’t fall Saturday, but Phoenix reached a sweltering high of 115 degrees (46 C) for the day and Las Vegas hit 111 degrees (44 C). Both were 3 degrees shy of records for the date, forecasters said.

Predicted highs on Sunday of 116 degrees (46.6 C) in Phoenix and 113 degrees (45 C) in Las Vegas were expected to fall short of high marks for June 20, the National Weather Service said.

But Phoenix did set a record Saturday for consecutive 115-degree (46 C) days, meteorologist Isaac Smith said, and Sunday could extend the record to six days.


SAN FRANCISCO (Courthouse News) — A trust for paying wildfire victims can’t interfere in a $400 million insurance fight that will determine how much money fire survivors can get for liability claims against former Pacific Gas and Electric leaders, a bankruptcy judge ruled Tuesday.

U.S. Bankruptcy Judge Dennis Montali denied the PG&E Fire Victim Trust’s motion to intervene in an arbitration dispute between PG&E and its insurers.

When PG&E emerged from bankruptcy last year, it assigned the right to pursue breach of fiduciary duty claims against PG&E officers and directors for alleged fire safety shortcomings related the 2017 North Bay fires and 2018 Camp Fire.

To vindicate those claims, the Fire Victim Trust sued 22 former PG&E board members and executives in April. But the maximum fire victims can recover is limited by PG&E’s maximum insurance coverage.

An entire town in Canada has been evacuated as at least 16 wildfires burn uncontrollably in British Columbia amid its hottest weather ever recorded.

All 250 people who live in the town of Lytton, about 150 miles northeast of Vancouver, were ordered to flee their homes on Wednesday as raging wildfires nearby threaten to burn them to the ground.

The mayor of Lytton, Jan Polderman, said the fire only ‘took about 15 minutes’ to engulf the entire town not long after he issued the evacuation order at 6pm local time.

Meanwhile, in California, a massive 13,000 acre wildfire that’s been named the ‘Lava Fire’ is growing out of control in the Shasta-Trinity National Forest, near Redding.

by weatheriscool
Biden to push firefighter wages above $13 as U.S. braces for record wildfire season

June 30 (Reuters) - U.S. President Joe Biden on Wednesday will announce pay raises and bonuses for federal firefighters ahead of a meeting with western state governors who may face a record number of forest blazes this year because of drought and high temperatures.

Wednesday's virtual meeting, to include Cabinet officials, aims to show the White House is treating wildfires - which have grown by at least 100 incidents each year since 2015 - are no less a national emergency than hurricanes, a senior administration official said on Tuesday.

As climate change makes regions like the U.S. western states more arid, wildfires have grown more frequent and ferocious. At the same time, the U.S. Forest Service and the Bureau of Land Management face staffing shortages accelerated by low pay and competition from state and local fire departments.

The U.S. government employs some 15,000 firefighters to battle wildfires on federal land, including thousands of seasonal workers who start at roughly $13 an hour and rely on overtime and hazard pay to make ends meet. Biden recently called that a "ridiculously low salary." He plans to announce that no federal firefighter will make less than $15 an hour, the official said.

by weatheriscool
Village of Lytton, B.C., evacuated as mayor says 'the whole town is on fire'
Several out-of-control wildfires burning in other parts of province after heat wave

A small B.C. village that endured the hottest temperatures ever recorded in Canada for days on end this week was engulfed in flames Wednesday night and residents were forced to flee, many without their belongings.

Mayor Jan Polderman says he told everyone to leave Lytton, as a fire rapidly spread into the community of about 250 people. He signed the official evacuation order at 6 p.m. PT.

"It's dire. The whole town is on fire," Polderman told CBC News. "It took, like, a whole 15 minutes from the first sign of smoke to, all of a sudden, there being fire everywhere."

Cyprus has appealed for international help to tackle a huge wildfire described by officials as the worst in the country's history.

The blaze, fanned by strong winds, is spreading through the southern Limassol district and has forced the evacuation of several villages.

Cyprus has been experiencing a week-long heatwave, with temperatures reaching up to 40C (104F).

Experts say that climate change is expected to increase the frequency of extreme weather events, such as heatwaves. However, linking any single event to global warming is complicated. 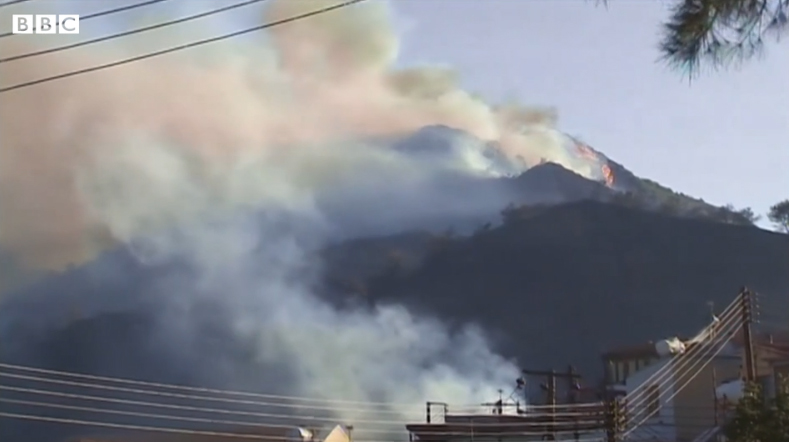