The Price of Olympic Glory
by Emily Stewart
July 22, 2021

(Vox) There is a ton of money to be made at the Olympics, even in a year like this. NBC has paid $7.7 billion for broadcasting rights to show the Olympics through 2032, and it’s already sold $1.25 billion in ads for the Tokyo games. The Associated Press estimates the International Olympic Committee (IOC), which runs the Olympic Games, stands to make $3 billion to $4 billion on television rights for the delayed 2020 Olympics. One NBC executive said they believe this could be the most profitable Games ever.

And yet, much of that wealth won’t be shared with the event’s most valuable assets: the athletes themselves.

Some 11,000 athletes are competing in the 2020 Olympic Games, and 4,000 athletes in the Paralympics (beginning in late August). There are more than 600 athletes just on Team USA’s Olympic and Paralympic roster. (For the purposes of this story, I’m going to focus mainly on American athletes.) The vast majority of those athletes are not rich, or close to it.

You cannot watch TV or exist on the internet right now without running into a Simone Biles ad. The Olympic gold medal gymnast got plenty of well-deserved, high-paying endorsement deals lined up. But she is the exception, not the rule. According to one survey of elite athletes from 48 countries, more than half are financially unstable. And that survey was taken before the pandemic, which made many competitors’ financial situations even worse because so many competitions (that often translate to money) were canceled.

“As impressive as someone like Simone Biles is or Michael Phelps has been, their stories get told and their achievements get reported on and analyzed. But there are incredible stories of people who really have to go work in regular jobs, depending on where they are in the world, to earn money just so they can live, and then they’re doing their training on top of it,” said Lee Igel, a clinical professor at the NYU Tisch Institute for Global Sport.

How the COVID-19 Delay of the Tokyo Olympics Helped Some Athletes Break Records
July 20, 2021

(The Conversation) After an unprecedented delay due to a once-in-a-century global health crisis, the Tokyo Games are finally ready to begin. Yet the athletes, like the Games themselves, have changed.

A year ago, the New York Times reported on the phenomenon of athletes thriving through lockdown.

In the year since, all four have smashed national or world records in the lead up to what will surely be an Olympic Games for the ages. 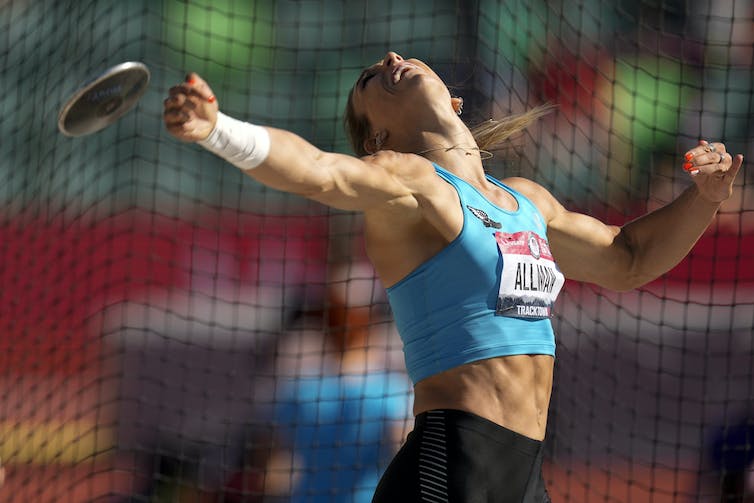 This story (see below) is slightly dated, but since it deals in robotics, a subject that crops up in this forum quite often, I will go ahead an post it. Better late than never.

(Axios) With no spectators allowed at the Tokyo Olympics, robots might be the only ones on hand to witness the athletic feats at this year's Summer Games.

Why it matters: Organizers had billed the 2020 Olympics as "the most innovative ever," with plans to deploy teams of robots to assist and dazzle visiting athletes and fans.
Driving the news: Tokyo entered a new state of emergency this week, less than two weeks before the start of the Olympics as it seeks to stem a rise in COVID-19 cases.

However, she lost her semi-final and the bronze-medal playoff to finish fourth.

She went on to defeat Zhou Lijun of China 9-8 in the quarterfinals, mounting a stirring final-minute rally for the second straight bout.

Alizadeh’s streak raised hopes that the Refugee Olympic Team could take home its first medal in history during the Tokyo games, however she lost her bronze medal bout to Turkey’s Hatice Kubra Ilgun. 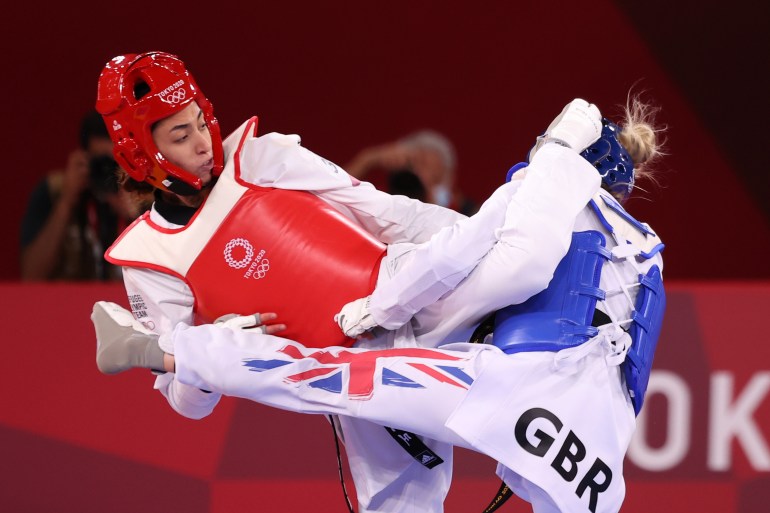 
(Al Jazeera) Nobody was watching Ahmed Hafnaoui in lane eight of the Olympic pool but all eyes were on the Tunisian teenager at the finish.

Hafnaoui was the stunning winner of the 400 metres freestyle at the Tokyo Games on Sunday, beating a field of faster and older swimmers.

The 18-year-old finished in three minutes, 43.26 seconds, punctuating his victory with loud yelling that echoed in the mostly empty 15,000-seat arena.

He was the slowest qualifier to start the final.

“I believed it when I touched the wall and I saw myself first,” he said. “I was so surprised.” 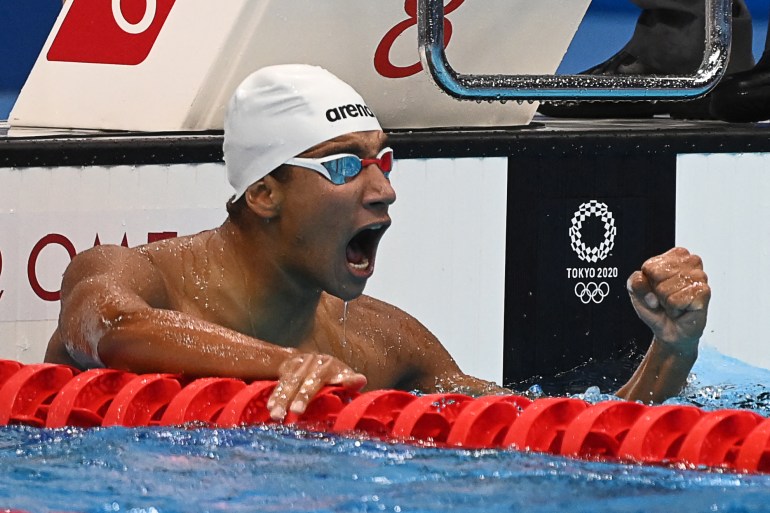 This is not how USA Basketball expected to open its Olympic summer.
Nigeria probably didn’t expect it, either.


If there was any expectation of invincibility for the Americans heading into the Tokyo Olympics, it’s already gone — after Nigeria beat the U.S. 90-87 on Saturday night, an international shocker pulled off by a roster primarily filled by little-known NBA players that found a way to beat a group of All-NBA, All-Star and max-contract performers.

“We just wanted to compete,” said Nigeria’s Gabe Nnamdi, who goes by Gabe Vincent when playing for the Miami Heat. “We know what USA Basketball means around the world and what they’ve stood for for so long.”

The U.S. had lost 11 games before Saturday in major international play — Olympics and World Cups, mostly — since NBA players began filling the American rosters with the first Dream Team in 1992. None of those losses came against a team from Africa.

The U.S. was a juggernaut. There was nothing Melnikova, then 16 years old, could do except grow determined to make the next time different.

Well, the next time is here, and while the Americans should remain the favorite to win Tuesday’s team title, it was Melnikova and her Russian teammates who posted the top team score in Sunday’s qualifying, not the United States.

Russia recorded a score of 171.629 to the United States’ 170.562. That’s a 1.067 advantage. Although the scores do not carry over, the Russians clearly should be confident that they can take down the mighty Americans in what would be a monumental upset.

“We hope that,” Melnikova told the media Sunday with a translator. “We’re also going to struggle and fight. We have to. That’s the expectation for us.”

These Olympics were supposed to be so futuristic... and the fact they're taking place during a global pandemic certainly sells the "cyberpunk" aspect of it all
And remember my friend, future events such as these will affect you in the future
Top

(Vox) This summer’s Olympic Games could be the warmest in decades. Tokyo, where the Games will be held, may see dangerously high temperatures, in excess of 90 degrees.

The athletes will likely be prepared. Scientists like Oliver Gibson, an exercise physiologist at Brunel University in the UK, have spent decades studying how athletes can adapt to extreme heat conditions. He says that with training, the human body has a remarkable capacity for cooling itself when the temperature rises.

These days, though, Gibson is less worried about the athletes. While running a marathon in 90-degree heat can be dangerous, even with preparation, there’s a much larger threat for everyday people coping with the new realities of climate change. “A lot of what we’re doing now is taking the decades’ worth of insight that we’ve gathered from the athletes and starting to apply it to the general population,” Gibson says.

Coping with heat stress is a growing issue that “will affect more than just your dozen or so Olympic finalists,” he says. “Millions, billions of people are undoubtedly going to be affected by climate change.” Heat emergencies are already the deadliest weather events, and are likely to keep getting worse. To beat the heat, we’ll need to confront it, Gibson says. He believes that research into elite athletes could help make our bodies more resilient in a warming world.

This conversation has been edited for length and clarity. (See article linked above quote box for interview)