The US also has the Grumman X47B stealth drone. The US spent about $1 billion on the Navy X47B stealth drone program and built two of them before retiring them. The wingspan of the blended-wing-body design, Korean KUS-FC drone, is 16 meters (53 ft.) and the length is 10 meters. The second X47B was larger and had a 62 foot wingspan and weighed about 7 tons empty and would takeoff with 20 tons of weight.

South Korea is also developing “suicide drones” that would deploy from a soldier’s backpack with a significant payload of explosives.

South Korea is also developing ground support robots. These are like unmanned jeeps to support a squad by carrying about 1 ton of equipment.

How Corporate Profiteers Won the War on Terror
by William Hartung
September 21, 2021

Corporations large and small have left the financial feast of that post-9/11 surge in military spending with genuinely staggering sums in hand. After all, Pentagon spending has totaled an almost unimaginable $14 trillion-plus since the start of the Afghan War in 2001, up to one-half of which (catch a breath here) went directly to defense contractors.

“The Purse is Now Open”: The Post-9/11 Flood of Military Contracts

The political climate created by the Global War on Terror, or GWOT, as Bush administration officials quickly dubbed it, set the stage for humongous increases in the Pentagon budget. In the first year after the 9/11 attacks and the invasion of Afghanistan, defense spending rose by more than 10% and that was just the beginning. It would, in fact, increase annually for the next decade, which was unprecedented in American history. The Pentagon budget peaked in 2010 at the highest level since World War II — over $800 billion, substantially more than the country spent on its forces at the height of the Korean or Vietnam Wars or during President Ronald Reagan’s vaunted military buildup of the 1980s

…a new strategy is needed, one that increases the role of American diplomacy, while focusing on emerging and persistent non-military security challenges. “National security” needs to be redefined not in terms of a new “cold war” with China, but to forefront crucial issues like pandemics and climate change.

It’s time to put a halt to the direct and indirect foreign military interventions the United States has carried out in Afghanistan, Iraq, Syria, Somalia, Yemen, and so many other places in this century. Otherwise, we’re in for decades of more war profiteering by weapons contractors reaping massive profits with impunity.

(Inverse) CONGRESS MAY TAKE STEPS TO RAMP UP INVESTIGATIONS OF UFOS — UAPs, in the new terminology — following a Department of Defense report to Congress over the summer recognizing the reality of these “Unidentified Aerial Phenomena,” but found no evidence of extraterrestrial involvement.

Those hoping for a full-throated Congressional hunt for technologically advanced aliens of UFO lore may be disappointed, however. The bills appear driven more by entirely Earthly national security and safety concerns than little green men in hypersonic lozenge-shaped vessels.

In June, the UAP Task Force presented a report to Congress that covered 144 UAP sightings by military and other federal sources between 2004 and 2021. While the report found no evidence of aliens, it did note that “UAP clearly pose a safety of flight issue and may pose a challenge to U.S. national security,” and that “Some UAP many be technologies deployed by China, Russia, another nation, or non-governmental entity.”

WHAT WOULD THE BILLS DO? If the bill becomes law, Section 345 of S.2610 would require the entire intelligence community to share any information about UAPs with the task force and the National Air and Space Intelligence Center immediately. It would then mandate classified reports about any UAP events to Congress beginning 90 days after the act's passage and quarterly from then on.

By Eric Cheung and Brad Lendon,

While the Chinese planes in the afternoon sortie stayed in the extreme southwestern part of the ADIZ, the planes involved in the evening flight flew through the defense zone and hooked up toward the northeast before reversing course and returning to the Chinese mainland, the Defense Ministry said.

(The Asahi Shimbun) U.S. F-35B fighter jets took off from and landed on the Maritime Self-Defense Force’s destroyer Izumo in a test off the Shikoku region on Oct. 3, the Defense Ministry said Oct. 5.

The ministry plans to convert the helicopter-carrying destroyer into an aircraft carrier, and the test was designed to check the heat-resistance of the renovated deck.

The F-35B is a stealth fighter capable of short takeoffs and vertical landings. The ministry plans to deploy the aircraft to Air Self-Defense Force’s Nyutabaru Air Base in Miyazaki Prefecture.

Defense Minister Nobuo Kishi revealed the test at an Oct. 5 news conference after the Cabinet meeting.

It was the first time for F-35Bs to use an MSDF naval vessel for takeoffs and landings.

The Royal Navy's latest supercarrier, HMS Prince of Wales, has launched jet-propelled drones from its flight deck for the first time as an experiment to see if autonomous aircraft can replace crewed fighters in simulated in-coming attack exercises.

If you ask the average person what makes one navy a better fighting force than another, odds are they will point to things like ships, submarines, missiles, fighter planes, and other pieces of hardware. While these are important, the real deciding factor is constant training that is repeated so often that it becomes a matter of reflex and combat feels like an unusually realistic drill.

Unfortunately, such training is incredibly expensive and often dangerous for the participants. One example of this is the drills needed to train sailors in carrier task forces to counter attack low-flying fighter planes that get close enough to launch missiles well inside the defense umbrella.

BEIJING, Oct 11 (Reuters) - China's military said on Monday it had carried out beach landing and assault drills in the province directly across the sea from Taiwan, though it did not link the exercises to current tensions with Taipei.

Democratically ruled Taiwan, claimed by China as its own territory, has complained of stepped-up military and political pressure from Beijing to force it to accept Chinese rule, including massed air force incursions into Taiwan's air defence identification zone. read more

The official People's Liberation Army Daily newspaper, in a brief report on its Weibo microblogging account, said the drills had been carried out "in recent days" in the southern part of Fujian province.

The action had involved "shock" troops, sappers and boat specialists, the Chinese military newspaper added. The troops were "divided into multiple waves to grab the beach and perform combat tasks at different stages", it added, without providing further details.

(The Drive) On October 7, 2021, we learned that one of the U.S. Navy's prized Seawolf class nuclear fast attack submarines—one of just three ever built—had suffered a serious underwater collision. The incident supposedly occurred while the USS Connecticut (SSN-22) was operating in or very near the tumultuous South China Sea. The damaged submarine subsequently limped its way to Guam so that the damage can be assessed. Thankfully, nobody on board died and the vessel's nuclear reactor remained in a safe condition.

Exactly what Connecticut hit remains a mystery, but many have expressed their utter puzzlement to us as to how a multi-billion dollar nuclear submarine that is laden with some of the most capable sensors on the planet — literally one of the most advanced vehicles mankind has ever built — can just run into something below the waves.

With that question in mind, we reached out to veteran submariner Aaron Amick, a friend and contributor to the site and the proprietor of Sub Brief, who spent 20 years as a sonarman aboard America's attack and ballistic missile submarine force, as well as an instructor to new sonarmen. If anyone could give us the bottom line on how incidents like this can keep happening, as well as what would have happened aboard Connecticut after the collision and what might come next for some of the crew, he could.

Just as we thought, he certainly did just that. Here is our exchange: 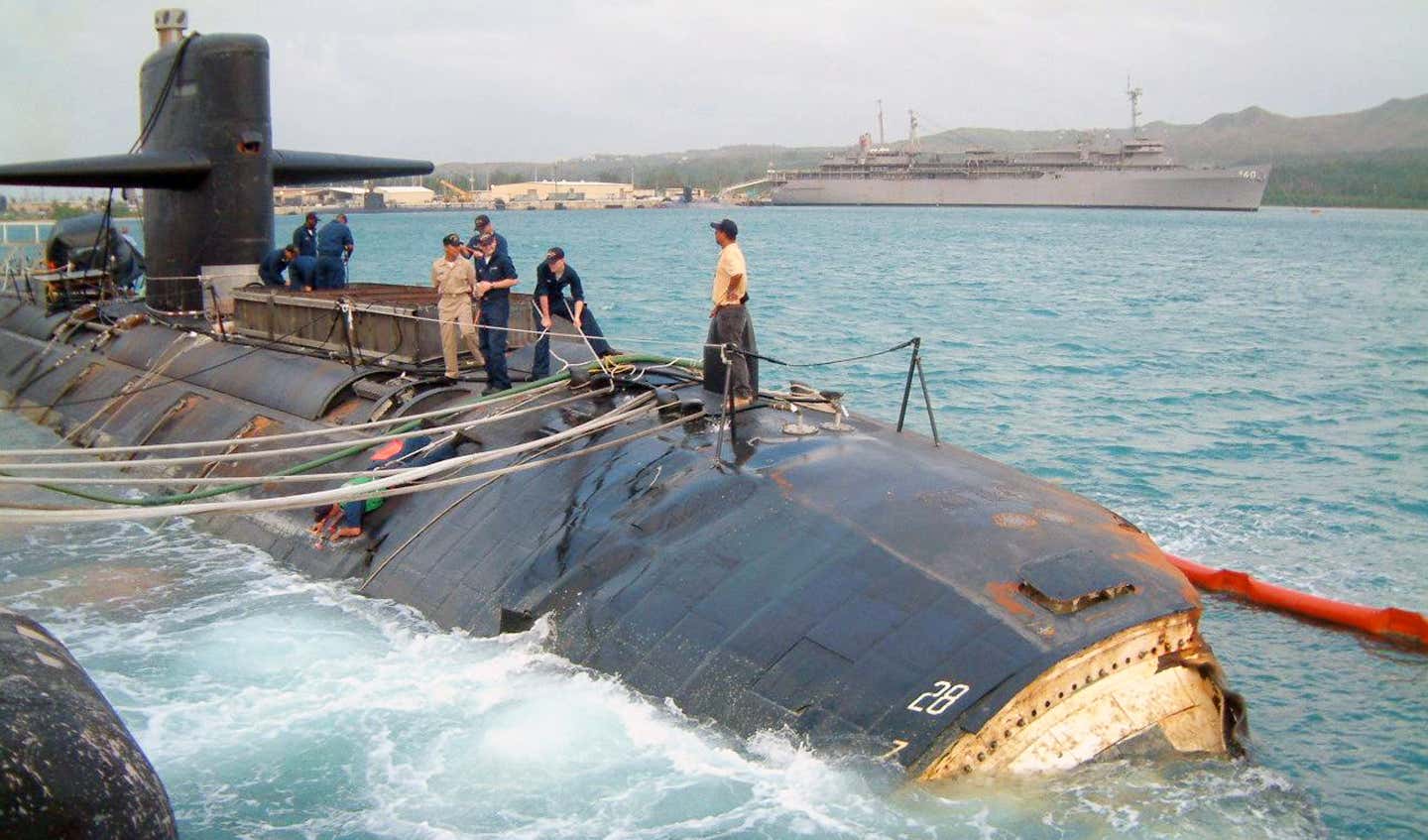 USS San Francisco pulling into Guam after its impact with a seamount.
Top

The airstrikes, confirmed by two humanitarian workers, came days after a new military offensive was launched against the Tigray forces who have been fighting Ethiopian and allied forces for nearly a year.

Mekele hasn’t seen fighting since late June, when the Tigray forces retook much of the region and Ethiopian troops withdrew. Since then, Ethiopia’s federal government has called all able citizens to crush the Tigray fighters who dominated the national government for 27 years before being sidelined by Prime Minister Abiy Ahmed. What began as a political dispute in Africa’s second-most populous country has now killed thousands of people.

Spokespeople for the military and the prime minister didn’t immediately respond to questions. The foreign ministry in a statement a few hours after the airstrikes didn’t mention them and instead called on the international community to “support Ethiopia’s overtures for peace.”

It Is Time To Ban Killer Drones
by Peter Weiss and Judy Weiss
October 20, 2021

(Other Words) Everyone who followed the withdrawal of American troops from Afghanistan was horrified by the drone attack, called a “tragic mistake” by the Pentagon, which killed 10 members of a single family, including 7 children.

Zemari Ahmadi, who worked for Nutrition and Education International, a U.S.-based aid organization, became the target because he drove a white Toyota, went to his office, and stopped to pick up containers of clean water for his extended family.

Those actions, deemed suspicious by the drone surveillance program and its human handlers, were enough to identify Ahmadi falsely as an ISIS-K terrorist and place him on the kill list for that day.

It would be comforting to think that the Ahmadi killing was one of those one-in-a-thousand tragic affairs, but that would be a mistake. In fact, as many as one-third of people killed by drone strikes have been found to be civilians.

While it is difficult to get an accurate count of deaths resulting from drone strikes, there are many documented reports of civilians being mistakenly targeted and killed.