ISLAMABAD (AP) — The Taliban say they don’t want to monopolize power, but they insist there won’t be peace in Afghanistan until there is a new negotiated government in Kabul and President Ashraf Ghani is removed.

In an interview with The Associated Press, Taliban spokesman, Suhail Shaheen, who is also a member of the group’s negotiating team, laid out the insurgents’ stance on what should come next in a country on the precipice.

The Taliban have swiftly captured territory in recent weeks, seized strategic border crossings and are threatening a number of provincial capitals, as the last U.S. and NATO soldiers leave Afghanistan. This week, the top U.S. military officer, Gen. Mark Milley, told a Pentagon press conference that the Taliban have “strategic momentum,” and he did not rule out a complete Taliban takeover. But he said it is not inevitable. “I don’t think the end game is yet written,” he said.

Memories of the Taliban’s last time in power some 20 years ago, when they enforced a harsh brand of Islam that denied girls an education and barred women from work, have stoked fears of their return among many. Afghans who can afford it are applying by the thousands for visas to leave Afghanistan, fearing a violent descent into chaos. The U.S.-NATO withdrawal is more than 95% complete and due to be finished by Aug. 31.

Key Afghan City in Danger of Falling to the Taliban
Source: NY Times


KABUL, Afghanistan — An important city in Afghanistan’s south was in danger of falling to the Taliban on Saturday as their fighters pushed toward its center despite concerted American and Afghan airstrikes in recent days.

Reports from Lashkar Gah, capital of Helmand, a province where the Taliban already controlled much of the territory before their recent offensive, were dire: People were fleeing their homes, a hospital in the city had been bombed, and government reinforcements were only now arriving after days of delays.

“We are just waiting for the Taliban to arrive — there is no expectation that the government will be able to protect the city any more,” said Mohammadullah Barak, a resident.

What comes next in Lashkar Gah is anything but certain — the city has been on the brink of a Taliban takeover off and on for more than a decade. But if the insurgent group seizes the city this time it will be the first provincial capital to fall to the Taliban since 2016.

Lashkar Gah, the besieged capital of Helmand Province, in May this year.Credit...Jim Huylebroek for The New York Times

(CNN)The United States has ramped up airstrikes against the Taliban in a bid to turn back the militants' advances on a number of key provincial capitals in Afghanistan, a senior Afghan security official said Monday.

Over the past 72 hours, US airstrikes have targeted Taliban positions around the cities of Herat, Kandahar and Lashkar Gah, the official said.

"They strike multiple times when the Taliban try to enter the city," the official said, adding that the three cities were considered "endangered" by Taliban advances.

American officials have recently confirmed that US airstrikes are active in Afghanistan again, yet declined to provide details of the targets.

By TAMEEM AKHGAR and RAHIM FAIEZ


KABUL, Afghanistan (AP) — The Taliban pressed ahead with their advances in southern Afghanistan on Tuesday, capturing nine out of 10 districts of the Helmand provincial capital, residents and officials said. Afghan government forces launched airstrikes, backed by the U.S., in a desperate effort to defend the city of Lashkar Gah.

The fall of Lashkar Gah would be a major turning point in the offensive the Taliban have waged over the past months as U.S. and NATO forces complete their pullout from the war-torn country. It would also be the first provincial capital captured by the Taliban in years.

Residents of the city, speaking to The Associated Press over the telephone, said the fighting has them trapped, hunkered down inside their homes and unable to step out for basic supplies. They said Taliban fighters were out openly in the streets, and that all but one Lashkar Gah district was under Taliban control.

Elite commando units were dispatched from Kabul to aid Afghan forces as the government held on to key government buildings, including the local police and army headquarters.

The blast went off late Tuesday in a heavily guarded upscale neighborhood of the capital of Kabul. It was followed by a gun battle that also left four militants dead, authorities said.

Taliban spokesman Zabihullah Mujahid in a statement Wednesday claimed responsibility for the attack. It came as the insurgent group presses ahead with an offensive that is putting pressure on provincial capitals in the south and west of the country.

The government did not deny lawmaker Mohammad Karim Jawzjani’s claim that Taliban fighters had entered Sheberghan, but said the city had not fallen. If the city falls, it will be the second provincial capital in as many days to succumb to the Taliban. Several other of the country’s 34 provincial capitals are threatened.

On Friday, the Taliban took control of the southwestern Nimroz provincial capital of Zaranj, where the government says it is still battling insurgents inside the capital.

Sheberghan is particularly strategic because it is the stronghold of U.S-allied Uzbek warlord Rashid Dostum, whose militias are among those resurrected to aid the Afghan National Security and Defense Forces.

The Taliban have captured the key northern Afghan city of Kunduz after fierce fighting with government forces.

A local official told the BBC all but the city's airport had fallen to the militant group.

Chaotic scenes have been reported inside Kunduz, with buildings and shops ablaze. The Taliban's flag has been seen raised in the city centre.
...
There are reports that another northern city, Sar-e-Pul, has also been captured, although this is yet to be independently confirmed.

Afghanistan is falling apart faster than I thought. I was giving them a year but they might not make the new year.

The British foreign ministry warned of a high risk of terror attacks and "a worsening security situation" as the Taliban continued their offensive across Afghanistan.
The British government has told all UK nationals to leave Afghanistan immediately as fighting intensifies between Taliban militants and Afghan security forces.

The announcement came just hours after the Taliban ambushed and killed the director of Afghanistan's government media center in Kabul on Friday.

(Al Jazeera) The Taliban has captured two more cities in Afghanistan, taking the number of provincial capitals the group has seized since Friday to eight.

Farah city of the eponymous southwestern province and Pul-e-Khumri of the northern province of Baghlan both fell to the armed group on Tuesday. Local sources confirmed the capture of both provincial capitals to Al Jazeera.

“This afternoon the Taliban entered the city of Farah after briefly fighting with the security forces. They have captured the governor’s office and police headquarters,” Shahla Abubar, a member of Farah’s provincial council, told the AFP news agency on Tuesday.

The Taliban has captured the province’s central prison, according to parliamentarian Abdul Nasri Farahi.

Farah is now the second provincial city in the southwest of Afghanistan that the group has taken. On Friday, the Taliban captured neighbouring Nimruz province. 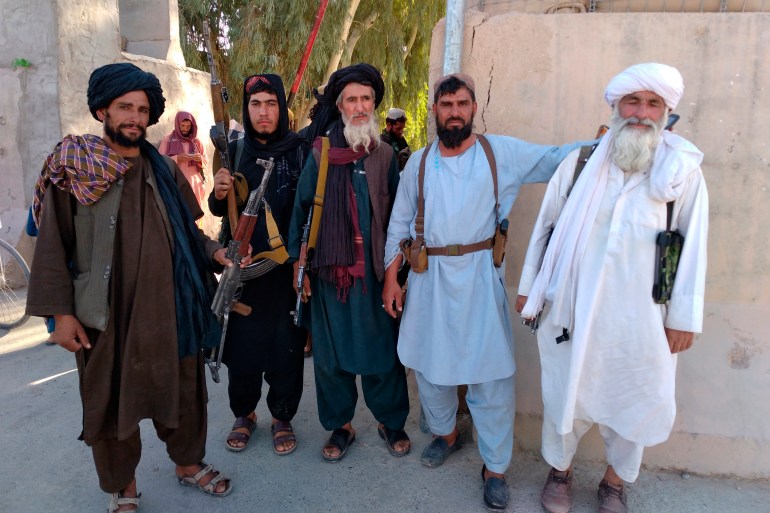 Biden says he does not regret Afghanistan withdrawal
Source: The Hill

President Biden on Tuesday said he does not regret his decision to pull U.S. forces out of Afghanistan amid reports of rising civilian casualties as the Taliban make gains in the country.

"We spent over $1 trillion over 20 years. We trained and equipped with modern equipment over 300,000 Afghan forces," Biden said at a news conference. "And Afghan leaders have to come together. We lost thousands, we lost to death and injury, thousands of American personnel. They’ve got to fight for themselves, fight for their nation."

"But they’ve got to want to fight," Biden added.

"I think they're beginning to realize they’ve got to come together politically at the top," the president said. "But we’re going to continue to keep our commitment. But I do not regret my decision."