Quantum sensing is being used to outpace modern sensing processes by applying quantum mechanics to design and engineering. These optimized processes will help beat the current limits in processes like studying magnetic materials or studying biological samples. In short, quantum is the next frontier in sensing technology.

As recently as 2019, spin defects known as qubits were discovered in 2D materials (hexagonal boron nitride) which could amplify the field of ultrathin quantum sensing. These scientists hit a snag in their discovery which has unleashed a scientific race to resolve the issues. Their sensitivity was limited by their low brightness and the low contrast of their magnetic resonance signal. As recently as two weeks ago on August 9, 2021, Nature Physics published an article titled "quantum sensors go flat," where they highlighted the benefits and also outlined current shortfalls of this new and exciting means of sensing via qubits in 2D materials.


Valleytronics is an emerging field in which valleys—local minima in the energy band structure of solids—are used to encode, process, and store quantum information. Though graphene was thought to be unsuitable for valleytronics due to its symmetrical structure, researchers from the Indian Institute of Technology Bombay, India, have recently shown that this is not the case. Their findings may pave the way to small-sized quantum computers that can operate at room temperature.

From the consumer's side, it's pretty easy to notice the giant strides that the field of electronics has made over the past few decades; with wearable gadgets, smart cities, self-driving cars, improved space missions, robots, holography, and supercomputers, the possibilities of technological advancement seem infinite. However, unbeknownst to most people, this accelerated trend of technological advancement fueled by electronics is rapidly coming to a halt as electronic components reach their practical limits. If we are to keep improving our computing power and capacity, we will need to find new ways to store and process data beyond the simple flow and charge of electrons, which is how modern electronics operates.

https://www.nextbigfuture.com/2021/09/i ... ubits.html
IonQ unveiled the first Reconfigurable Multicore Quantum Architecture (RMQA) technology, a breakthrough in quantum computing. It is starting with the demonstration of 4 chains of 16 ions each that can be dynamically configured into quantum computing cores. IonQ believes this can scale qubit count into the triple digits on a single chip, as well as future Parallel Multicore Quantum Processing Units.


This demonstration was achieved on a technological platform recently added to IonQ’s intellectual property warchest, called Evaporated Glass Traps (EGTs). Developed by an IonQ team led by UC Berkeley Physics PhD and ex-GTRI and -NIST researcher Jason Amini, the EGT platform offers an unprecedented level of performance and is a crucial part of IonQ’s roadmap to rapid scalability and increased computing power.

“The Reconfigurable Multicore Quantum Architecture marks a key milestone for IonQ and for the quantum computing industry in general,” remarked IonQ President and CEO Peter Chapman. “RMQA is a critical enabler of our ability to scale qubit density and deliver the computational power projected in our roadmap. We’re very proud of the team at IonQ that has achieved a powerful platform for scalability and control in a single technical breakthrough.”


CPQM's Laboratory for Quantum Information Processing has collaborated with the CDISE supercomputing team "Zhores" to emulate Google's quantum processor. Reproducing noiseless data following the same statistics as Google's recent experiments, the team was able to point to a subtle effect lurking in Google's data. This effect, called a reachability deficit, was discovered by the Skoltech team in its past work. The numerics confirmed that Google's data was on the edge of a so-called, density-dependent avalanche, which implies that future experiments will require significantly more quantum resources to perform quantum approximate optimization. The results are published in the field's leading journal Quantum.

From the early days of numerical computing, quantum systems have appeared exceedingly difficult to emulate, though the precise reasons for this remain a subject of active research. Still, this apparently inherent difficulty of a classical computer to emulate a quantum system prompted several researchers to flip the narrative.

Scientists such as Richard Feynman and Yuri Manin speculated in the early 1980s that the unknown ingredients which seem to make quantum computers hard to emulate using a classical computer could themselves be used as a computational resource. For example, a quantum processor should be good at simulating quantum systems, since they are governed by the same underlying principles.

Such early ideas eventually led to Google and other tech giants creating prototype versions of the long-anticipated quantum processors. These modern devices are error-prone, they can only execute the simplest of quantum programs and each calculation must be repeated multiple times to average out the errors in order to eventually form an approximation.

A new way to control qubits

A research team that includes two UO physicists have outlined new techniques for controlling the building blocks of quantum computing, a potentially significant step toward making such computers more accurate and useful.

Physicists David Allcock and David Wineland are founders of the new Oregon Ions Laboratory, which was recently set up in the basement of Willamette Hall. They are among 12 authors of a new paper, which is based on an experiment at the National Institute for Standards and Technology in Boulder, Colorado. Both scientists previously worked at the Colorado lab and continued to collaborate on the project after coming to the UO in 2018.

The techniques, described in the journal Nature, involve the use of trapped-ion quantum bits, or qubits, in quantum computing and simulations. They could lead to improvements in the operation of quantum computers, which still make too many computation errors to be effective tools, the physicists said.

The problem with quantum computers is that their logic gates—the tools used to perform basic logic functions in computing—"are really bad," Allcock said.

This is pretty significant.

Study demonstrates the potential of a quantum computer comprised of a small processor and a storage unit
https://phys.org/news/2021-10-potential ... essor.html
by Ingrid Fadelli , Phys.org

Quantum computing systems, computer systems that are based on the key principles of quantum theory, could significantly outperform conventional computing systems, both in terms of speed and performance. Over the past decade or so, many physicists worldwide have thus been trying to develop these systems and assess their potential.

Instead of encoding information in bits, units of information with binary values (i.e., either 1 or 0), quantum computers use quantum bits or qubits. Qubits are quantum mechanical analogs of bits that can exist in more than one state (i.e., 1 and 0 simultaneously).

Most quantum computing systems developed so far consist in a series of qubits placed on a 2D chip, which directly compute information. Classical computers, on the other hand, are made up of a processor, which processes information, and a memory, which stores information.

Researchers at Université Paris–Saclay, CNRS, CEA, have recently carried out a study evaluating the performance of a quantum computer with a structure that resembles that of conventional computers. Their results, published in Physical Review Letters, suggest that incorporating quantum information storage units into quantum computing systems could enable the creation of devices that contain significantly fewer qubits in their processors.


Researchers led by the Institute of Scientific and Industrial Research (SANKEN) at Osaka University have trained a deep neural network to correctly determine the output state of quantum bits, despite environmental noise. The team's novel approach may allow quantum computers to become much more widely used.

Modern computers are based on binary logic, in which each bit is constrained to be either a 1 or a 0. But thanks to the weird rules of quantum mechanics, new experimental systems can achieve increased computing power by allowing quantum bits, also called qubits, to be in "superpositions" of 1 and 0. For example, the spins of electrons confined to tiny islands called quantum dots can be oriented both up and down simultaneously. However, when the final state of a bit is read out, it reverts to the classical behavior of being one orientation or the other. To make quantum computing reliable enough for consumer use, new systems will need to be created that can accurately record the output of each qubit even if there is a lot of noise in the signal.

Now, a team of scientists led by SANKEN used a machine learning method called a deep neural network to discern the signal created by the spin orientation of electrons on quantum dots. "We developed a classifier based on deep neural network to precisely measure a qubit state even with noisy signals," co-author Takafumi Fujita explains.

Quantum advantage is a scientific concept that states a quantum computer can do things in some fields beyond the capability of non-quantum or classical computers, but it will never replace classical computers, Yuan Lanfeng, a research fellow at the Hefei National Laboratory for Physical Sciences at the Microscale of the University of Science and Technology of China (USTC), told the Global Times on Tuesday.

"Zuchongzhi 2.1," is 10 million times faster than the current fastest supercomputer and its calculation complexity is more than 1 million times higher than Google's Sycamore processor. It's the first time that China has reached quantum advantage in a superconducting quantum computing system.

"Zuchognzhi 2.1" has achieved a quantum advantage for the first time compared with an earlier processor named "Zu Chongzhi", a 62-qubit programmable superconducting quantum prototype designed by a Chinese research team from the USTC in May, Lu Chaoyang, a professor of the USTC in Hefei, capital city of East China's Anhui Province, told the Global Times on Tuesday. 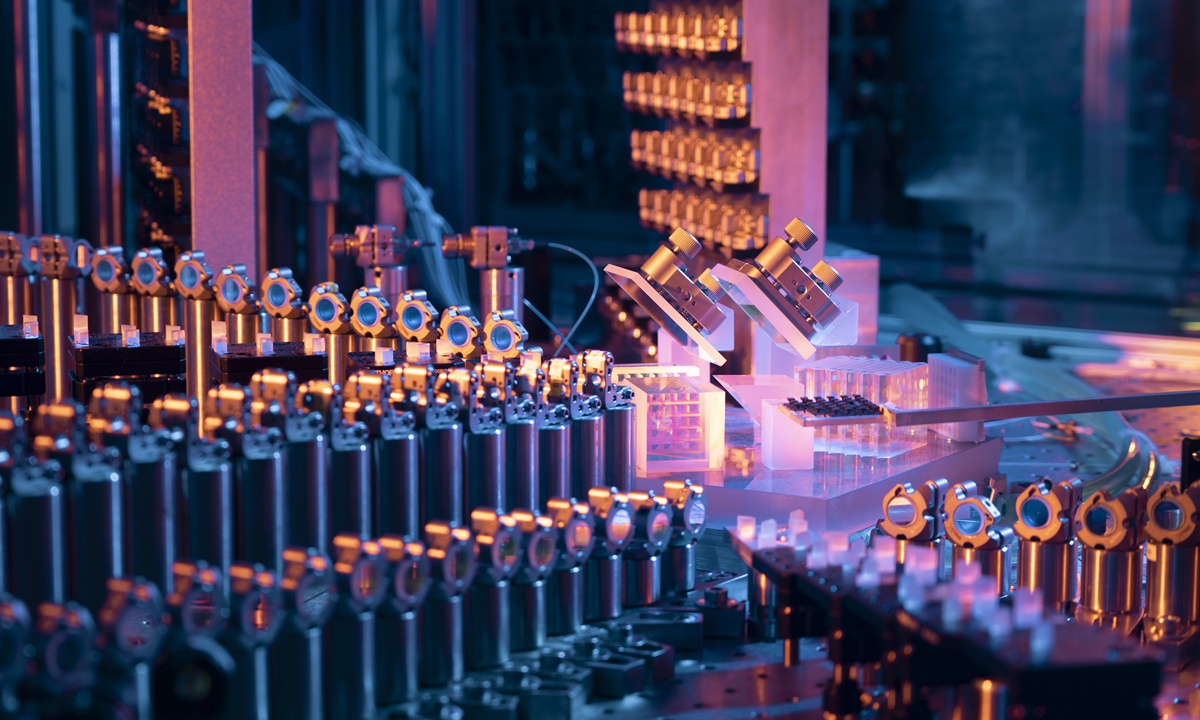