Google plans to build a commercial quantum computer by 2029

Google developers are confident they can build a commercial-grade quantum computer by 2029. Google CEO Sundar Pichai announced the plan during today's I/O stream, and in a blog post, quantum AI lead engineer Erik Lucero further outlined the company's goal to "build a useful, error-corrected quantum computer" within the decade.

Google makes products for consumers and businesses, but a lot of advanced computer science goes into making those products work. The company began working with neural networks around 20 years ago, enabling many of the cool features we take for granted on the user side. Now, Google is on to its next moonshot with the Quantum AI campus, where it hopes to build a useful, error-corrected quantum computer within the next decade. Ten years might sound like a long time, but it won’t be easy to crack quantum computing.

As Google explained during its recent quantum campus unveiling, quantum mechanics is the language of the universe. Quantum bits, or qubits, can be entangled in complex superpositions of states that mirror the way real molecules work. A computer that speaks that language has the potential to complete calculations much faster than traditional binary systems, enabling detailed simulations that could accelerate the development of batteries, drug discovery, unbreakable encryption, and more.

The race to build quantum computers that can deliver meaningful improvements to enterprises is accelerating. Among those leading the charge is a French startup that believes it has found a way to reach the scale and power to make quantum computing useful.

Founded in 2019, Pasqal is leveraging technology that was developed at the Institut d’Optique in Palaiseau, France and relies on a process called “neutral atoms.” According to cofounder and CEO Georges-Olivier Reymond, this technique has allowed the company to build processors with up to 200 qubits, inching ever closer to the coveted quantum advantage.

“We have demonstrated that the quantum computing power is here,” Reymond said. “The next step is to deliver it, which means building devices, developing a quantum-computing-as-a-service offer, and delivering the power on the cloud.”

Rare superconductor may be vital for quantum computing

Research led by the University of Kent and the STFC Rutherford Appleton Laboratory has resulted in the discovery of a new rare topological superconductor, LaPt3P. This discovery may be of huge importance to the future operations of quantum computers.

Superconductors are vital materials able to conduct electricity without any resistance when cooled below a certain temperature, making them highly desirable in a society needing to reduce its energy consumption.

Superconductors manifest quantum properties on the scale of everyday objects, making them highly attractive candidates for building computers which use quantum physics to store data and perform computing operations, and can vastly outperform even the best supercomputers in certain tasks. As a result, there is an increasing demand from leading tech companies like Google, IBM and Microsoft to make quantum computers on an industrial scale using superconductors.

I think this thread needs to be moved to the computer subforum.
Top

Researchers have discovered a new and more efficient computing method for pairing the reliability of a classical computer with the strength of a quantum system.

This new computing method opens the door to different algorithms and experiments that bring quantum researchers closer to near-term applications and discoveries of the technology.

"In the future, quantum computers could be used in a wide variety of applications including helping to remove carbon dioxide from the atmosphere, developing artificial limbs and designing more efficient pharmaceuticals," said Christine Muschik, a principal investigator at the Institute for Quantum Computing (IQC) and a faculty member in physics and astronomy at the University of Waterloo.

weatheriscool wrote: ↑Tue Jun 15, 2021 6:59 pm I think this thread needs to be moved to the computer subforum.

There's some overlap, but I think quantum computing has slightly more relevance to physics.
"Take it easy, nothing matters in the end."
– William Shatner
Top

Quantum computers could outperform classical computers at many tasks, but only if the errors that are an inevitable part of computational tasks are isolated rather than widespread events. Now, researchers at the University of Wisconsin-Madison have found evidence that errors are correlated across an entire superconducting quantum computing chip—highlighting a problem that must be acknowledged and addressed in the quest for fault-tolerant quantum computers.

The researchers report their findings in a study published June 16 in the journal Nature, Importantly, their work also points to mitigation strategies.

"I think people have been approaching the problem of error correction in an overly optimistic way, blindly making the assumption that errors are not correlated," says UW-Madison physics Professor Robert McDermott, senior author of the study. "Our experiments show absolutely that errors are correlated, but as we identify problems and develop a deep physical understanding, we're going to find ways to work around them."

IBM Ships Its First Quantum Computer Outside the United States
https://www.extremetech.com/computing/3 ... ted-states
By Joel Hruska on June 16, 2021 at 2:19 pm

The scientists at Germany’s Fraunhofer Institute have announced they’ve taken delivery of the kind of package most of us dream of getting — provided you’ve got a steady supply of liquid nitrogen on hand, a degree in theoretical physics (as opposed to a theoretical degree in physics), and a working knowledge of whatever it is you need to know to program quantum computers in the first place. Specifically, the researchers took possession of an IBM Quantum System One.

This is the first time IBM has shipped a quantum system outside the United States, and it’s a major goalpost on the company’s long-term drive to commercialize quantum computing. A system in Japan is expected to come online in July.

Quantum computers take up a lot of space. Researchers decided to shrink this one down

Quantum computers still require large, dedicated rooms and complex installations, but now, in a new step towards bringing the technology out of the lab, researchers have designed a prototype quantum computer that is compact enough to fit in ordinary data center racks.

As part of an EU-funded project called AQTION, a group of scientists from the University of Innsbruck in Austria successfully set up a fully functional ion trap quantum computer into two 19-inch server racks, as typically found in data centers around the world. The device only requires a single wall-mounted power plug and is otherwise self-contained.

The prototype is an exciting development in an industry that relies mostly on lab-based implementations, where quantum computers can only be controlled thanks to purpose-built infrastructure. Developing a set-up that is more accessible is therefore key to expanding the reach of the technology.

Even outside of the controlled environment that can be achieved in a lab, the device was stable enough to operate without interruption from external disturbances, and the physicists were able to individually control and entangle up to 24 ions. Measurements showed that the system's performance and error rate were on par with lab-based implementations.

By next year, the team is expecting to create a device with up to 50 individually controllable qubits. 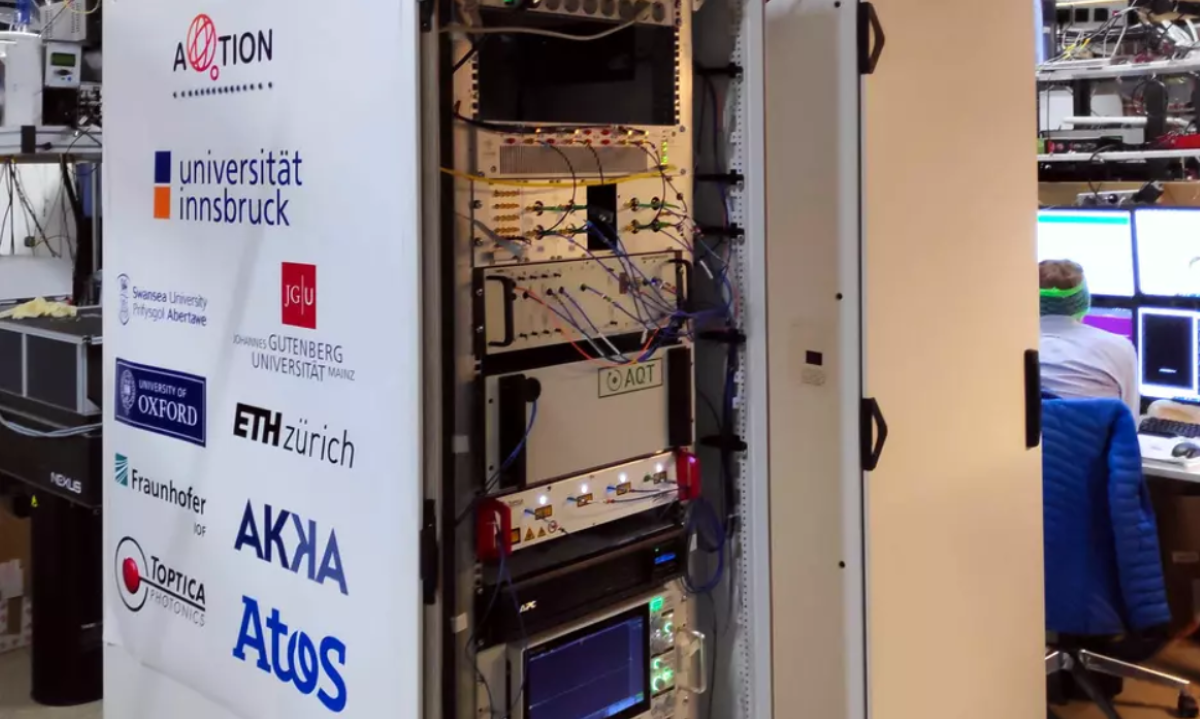