by Yuli Ban
Normally I'd start with a news article, but I'd rather relaunch this thread with a mention of something curious I found while looking for said topic-starting articles to post: so many neoliberal news groups seem obsessed with downplaying technological unemployment and the progress in AI that it's almost comical. Looking at Forbes alone, I can find so many articles that seem to be all about reassuring their readers that AI and robotics will only ever make jobs.
If we were talking about just robots, I'd be very inclined to agree. If anything, if this were the 1960s and AI was simply some algorithmic magic tricks by a few deluded geniuses, I'd even doubt there would be a meaningful robotic revolution. But times are different, and they're different for a reason. At some point it's going to become obvious that the "norm" is impossible to return to.

There is a less hard version of this, which is more or less doubt that the changes will be swift enough to unemploy everyone all at once and that we're entering a multigenerational twilight zone. You need to learn to future-proof yourself and stay attractive to employers through permanent education and highly adaptive skills. This seems to be yet more longing for the status quo: have all the benefits of transformative AI with none of the upsetting side-effects, keeping all the nasty stuff deep in the future so we don't have to dwell on it or consider radical changes to society.

I don't know the future, and nothing is absolute. But I will say that GPT-3 and the rise of transformers should have given plenty of people great pause for a damn good reason. With GPT-3, we're at a corner, and we don't know exactly what's around that corner other than that we know the corner is indeed there. It could lead to a dead-end or it could lead to something else entirely. We're not going to know for sure until we see the next generation unveiled, as GPT-3 is a mere language model on steroids. There are architectural challenges to overcome. But if we do overcome them, then the days of transformative AI will be claustrophobically close, perhaps too close for comfort, and it ought to be silly to take seriously any article that tries to peddle a Y2K Status Quo Trap.

"Full automation is not a distant concept. We already have mines in the Pilbara operated entirely through automation", he said A lot of future farming technology has been demonstrated a field days and events around Australia.(ABC News: Kathleen Calderwood)

The last 15 years have been tough times for many Americans, but there are now encouraging signs of a turnaround.

Productivity growth, a key driver for higher living standards, averaged only 1.3% since 2006, less than half the rate of the previous decade. But on June 3, the US Bureau of Labor Statistics reported that US labor productivity increased by 5.4% in the first quarter of 2021. What’s better, there’s reason to believe that this is not just a blip, but rather a harbinger of better times ahead: a productivity surge that will match or surpass the boom times of the 1990s.

There are three reasons that this time around the productivity J-curve will be bigger and faster than in the past.

The first is technological: the past decade has delivered an astonishing cluster of technology breakthroughs. The most important ones are in AI: the development of machine learning algorithms combined with large decline in prices for data storage and improvements in computing power has allowed firms to address challenges from vision and speech to prediction and diagnosis. The fast-growing cloud computing market has made these innovations accessible to smaller firms. 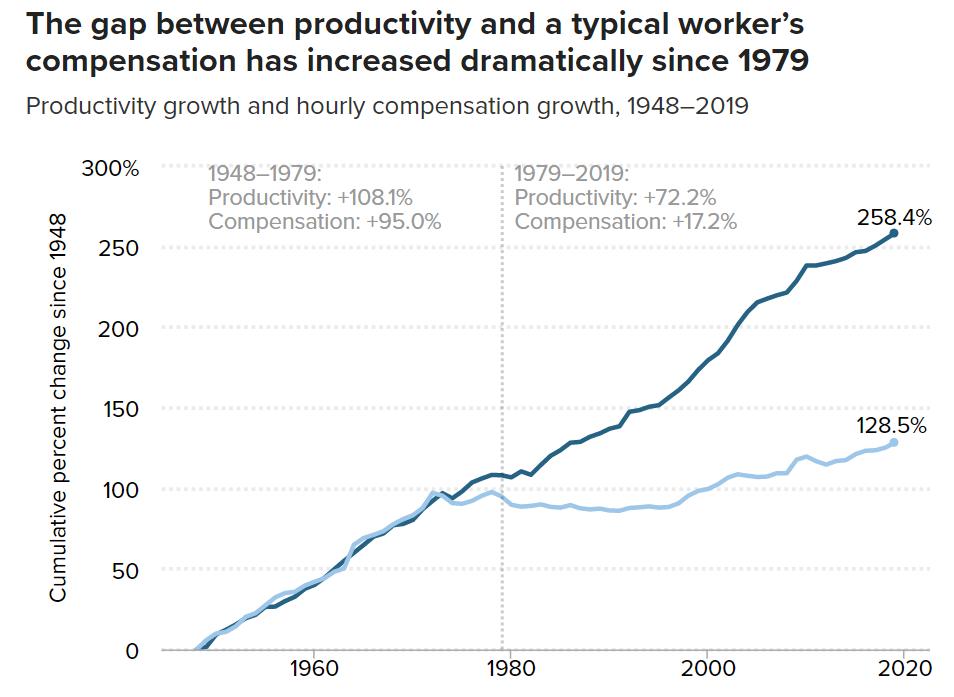 Unfortunately wages haven't generally increased with productivity gains since neoliberal policy makers rejected keynesian wage bargaining in the late 1970s in favor of austerity among other ills. For anyone who still isn't convinced that neoliberalism is one of the worst things that ever happened to economics you can trace it's emergence almost to the exact time as multiple negative economic trends like the one presented above. I intend to make a post here about automation, capitalism and the TRPF at some point. (Thanks for posting that Yuli.)

by Yuli Ban
Automate for people, not for processes
Whether or not you foresee the coming of “hyperautomation” — the notion that every business process that can be automated should or indeed will be automated in the future — it’s clear that the majority of corporations across the globe have already begun to strategize for this inevitability

An early 2020 global survey of business leaders by McKinsey & Co. revealed that close to a third of all companies worldwide have already fully automated at least one function — and that was before the pandemic. Enterprises in most industries have since shifted their automation attempts into overdrive, hoping to future-proof as much as is possible in the face of such unpredictability.

In their efforts to automate, many businesses prioritize individual process needs without prioritizing user experience. A company can achieve some cost savings this way, but such automations often fail to fully realize their potential.

Why? It risks alienating the people it set out to serve — meaning few people actually choose to use the tool.

According to a November Zapier automation confidence survey, nearly a third of workers said they were not yet convinced that automation is useful in their current role. And 10% felt it overly difficult to find time to learn the new skills required to benefit from automated applications on the job.

After months of waiting for workers to rejoin the labor force, some businesses have had it.

Just 10% of job seekers are urgently looking for openings, according to a recent survey conducted by hiring giant Indeed. Whether it's because of virus fears, childcare costs, financial cushions, or enhanced unemployment benefits, the jobless aren't clamoring for many of the jobs on offer, which are largely in the hard-hit restaurant and hospitality space.
Enter the QR-code. This technology, which allows a short-staffed restaurant to save on having a person physically bringing a menu to a diner's table, is the canary in the coal mine of automation. Other signs of an automation revolution are cropping up.
Hiring issues have been widespread in the restaurant industry for several months, as Insider reported, with major firms like McDonald's struggling to contend with the national labor shortage. A handful of them have begun turning to technology as a replacement to low-wage workers. For instance, Cracker Barrel rolled out a mobile app that lets customers pay for meals; McDonald's started testing automated drive-thru ordering at 10 Chicago locations; and Dave & Buster's plans to expand its contactless ordering.
The benefits are obvious. Automated solutions are often one-time investments, boost productivity, and don't require expensive solutions to fixing a staffing crisis like the signing bonuses also growing in popularity.

These aren't really robots, but I understand the sentiment.

Jesus
All times are UTC
Page 1 of 2