I guess we should have a thread for this, since it's emerging as a potential competitor to SpaceX.

As most of you probably know, Blue Origin is the space company established by Amazon boss (and world's richest person) Jeff Bezos in 2000. Additionally, the company has longer-term plans for a lunar lander, known as Blue Moon. This could deliver 4,500 kg (9,900 lb) to the Moon's surface and potentially astronauts too, using a New Glenn as the launch vehicle.

In related news, the smaller New Shepard rocket will attempt its first crewed flight tomorrow (20 July), after 15 uncrewed tests. A seat on the rocket was auctioned for $28 million and given to Oliver Daemen, son of millionaire businessman Joes Daemn.

18-year-old Daemen will be the youngest person to go into space... if all goes well. 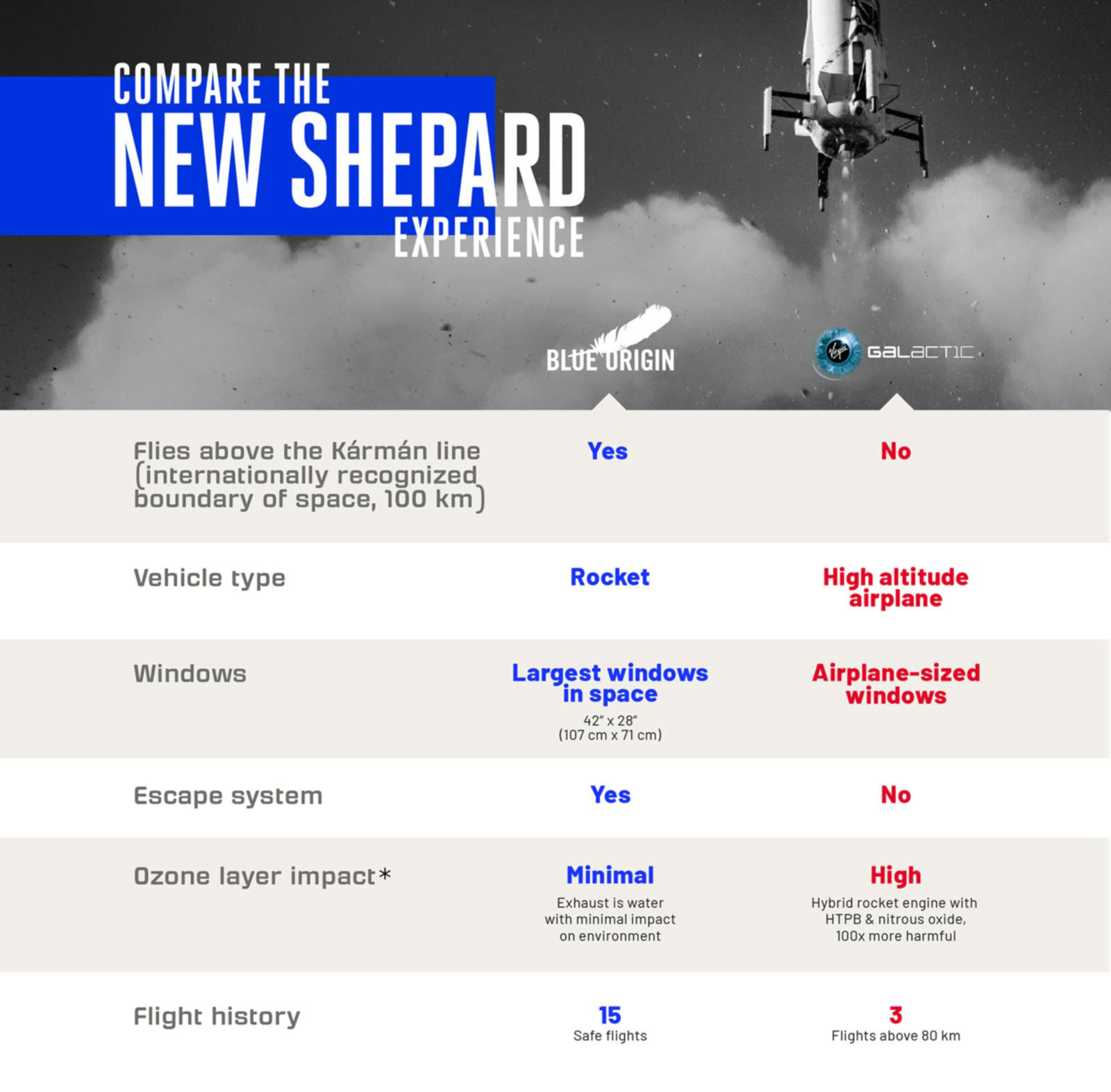 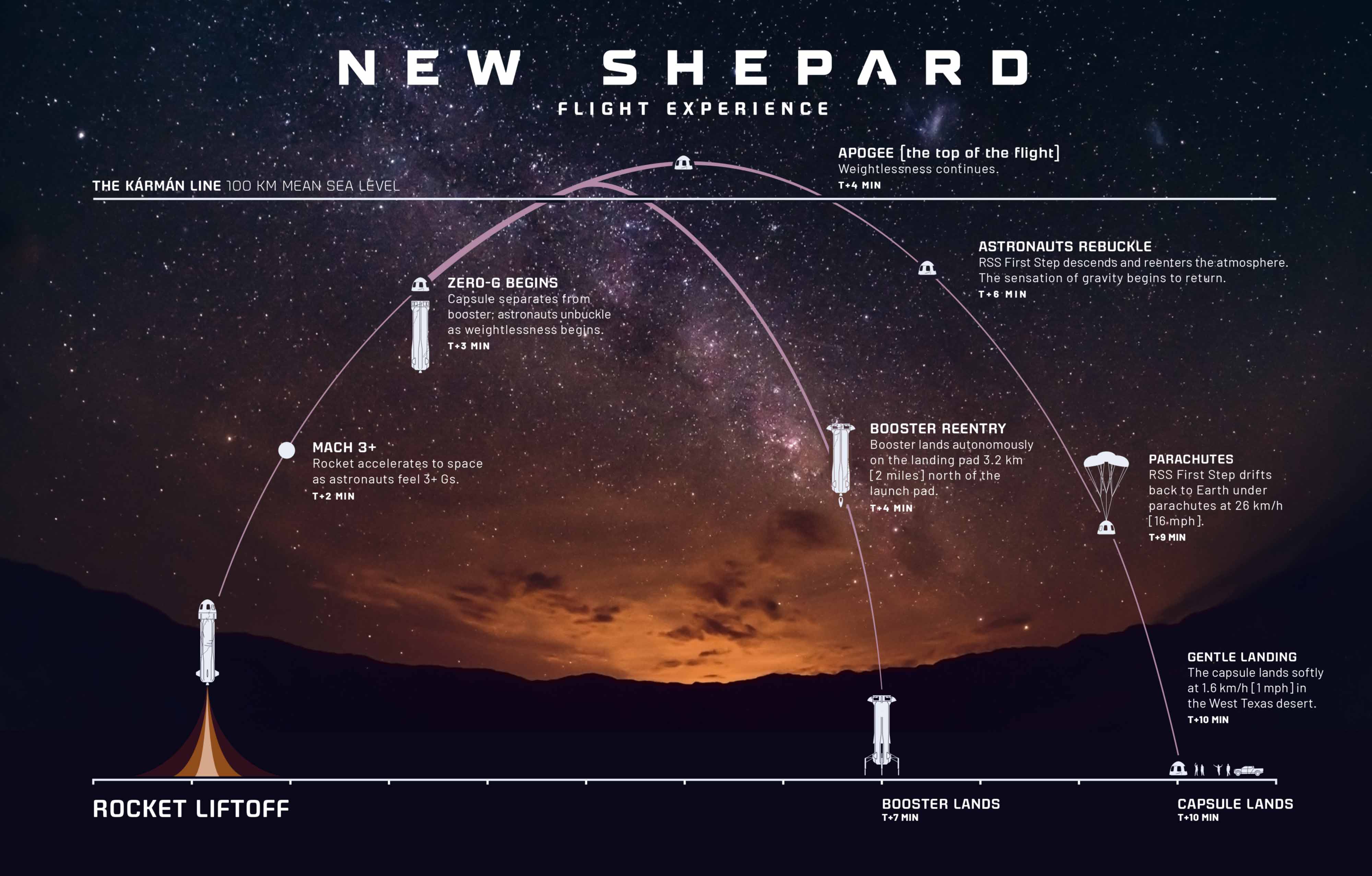 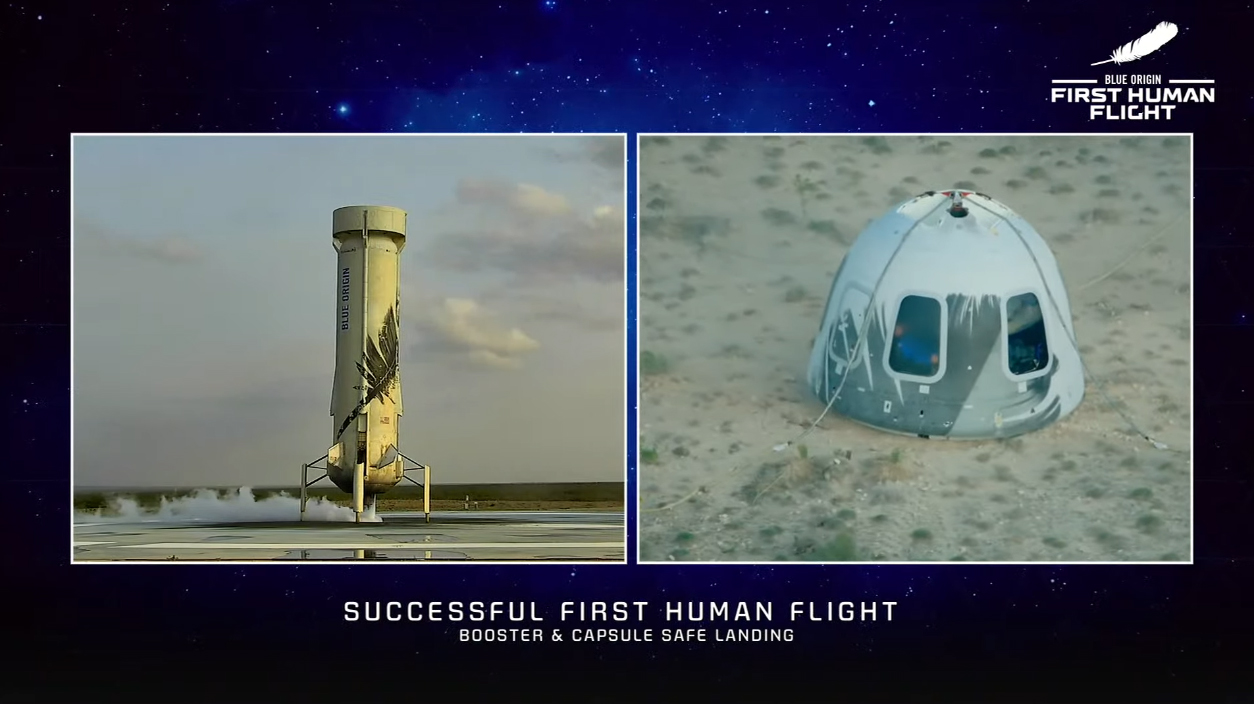 What the heck at the very end?

His Blue Origin company launched him into spaceflight history on Tuesday. Its first crewed New Shepard rocket blasted off from the Texas desert for the brief flight, also carrying his brother and the oldest and youngest people to ever have flown in space.

“Best day ever!” Bezos said after touchdown. “My expectations were high and they were dramatically exceeded.

The capsule carrying the Blue Origin crew accelerated to more than three times the speed of sound before it reached beyond the 80 kilometer boundary (about 50 miles) the U.S. uses to mark the edge of space. The crew capsule reached an altitude of 107 kilometers (66 miles), and the rocket hit a top speed of 2,233 mph during the launch.

The crew floated in microgravity for a couple minutes, before the capsule returned and landed under a set of parachutes to end the mission after 10 minutes and 10 seconds

Welcome to the Age of Billionaire Joyrides to Space
by Rebecca Heilweil
July 20, 2021

(Vox) ...At a pre-launch mission briefing on Sunday, Blue Origin’s director of astronaut sales Ariane Cornell said two more flights were anticipated this year and that the company had “already built a robust pipeline of customers that are interested.” Analysts at the investment banking firm Canaccord Genuity have estimated that tourism to suborbital space could be an $8 billion industry by the end of the decade.
Blue Origin hosted a live feed on its website.
…
To reach space, New Shepard moves incredibly quickly: faster than Mach 3, or more than three times the speed of sound. A few minutes into the flight, the capsule separated from the booster, which then headed back toward Earth and landed vertically (ensuring it’s reusable for future flights).

Meanwhile, Blue Origin’s capsule headed to the apex of its flight path and crossed the Kármán line, the internationally recognized border between Earth’s atmosphere and space. That’s about 62 miles above the Earth’s surface, about 10 miles higher than Richard Branson’s Virgin Galactic flight earlier this month. Like that flight, those traveling on Blue Origin’s New Shepard were given a stunning view of Earth and had the chance to experience weightlessness.
…
Bezos was joined by his brother, firefighter and charity executive Mark Bezos. The flight also carried both the oldest and youngest people to ever visit space: Wally Funk, an 82-year-old American aviator, and Oliver Daemen, an 18-year-old Dutch teenager. Funk, the Federal Aviation Administration’s first female flight inspector, was one of the first women to train to become a NASA astronaut, but was ultimately denied the chance to travel to space because of her gender. Daemen is joining the flight as Blue Origin’s first paying customer; he’s taking the place of a still-unnamed bidder who paid $28 million for a seat (that person reportedly had a scheduling conflict and will travel on a later flight).

(Axios) Jeff Bezos' flight into space generated more interest from the public than Richard Branson's, and both billionaires overshadowed their respective space companies.

Why it matters: Data shows an outsized public interest in the personalities at the center of the space trips, compared to the companies behind them — which could reinforce public suspicion that the ventures were partly vanity plays.

While I am as excited about the recent breakthroughs by the private sector in space travel as anybody else, I do think we need to ask some hard questions such as the one posed below.

How Bad is Space Tourism for the Environment?
By Rebecca Heilweil
July 25, 2021

(Vox) The emissions of a flight to space can be worse than those of a typical airplane flight because just a few people hop aboard one of these flights, so the emissions per passenger are much higher. That pollution could become much worse if space tourism becomes more popular. Virgin Galactic alone eventually aims to launch 400 of these flights annually.

“The carbon footprint of launching yourself into space in one of these rockets is incredibly high, close to about 100 times higher than if you took a long-haul flight,” Eloise Marais, a physical geography professor at the University College London, told Recode. “It’s incredibly problematic if we want to be environmentally conscious and consider our carbon footprint.”

These flights’ effects on the environment will differ depending on factors like the fuel they use, the energy required to manufacture that fuel, and where they’re headed — and all these factors make it difficult to model their environmental impact. For instance, Jeff Bezos has argued that the liquid hydrogen and oxygen fuel Blue Origin uses is less damaging to the environment than the other space competitors (technically, his flight didn’t release carbon dioxide), but experts told Recode it could still have significant environmental effects.

There are also other risks we need to keep studying, including the release of soot that could hurt the stratosphere and the ozone. A study from 2010 found that the soot released by 1,000 space tourism flights could warm Antarctica by nearly 1 degree Celsius. “There are some risks that are unknown,” Paul Peeters, a tourism sustainability professor at the Breda University of Applied Sciences, told Recode. “We should do much more work to assess those risks and make sure that they do not occur or to alleviate them somehow — before you start this space tourism business.” Overall, he thinks the environmental costs are reason enough not to take such a trip.

When are Customers Following Bezos Into Space

(Inverse) Blue Origin says it is taking orders for future flights from the company's Launch Site One in Van Horn, Texas. The company tells Inverse it has no details to share yet as to what the schedule for sending tourists to space looks like, but the firm’s leadership has let slip some clues about what’s next.

Blue Origin’s next crewed flight could come as soon as the end of September or the beginning of October 2021. That’s according to comments by Blue Origin CEO Bob Smith, made during a July 18 media briefing.

At the same event, Blue Origin Director of Astronaut and Orbital Sales Ariane Cornell said there will be two more Blue Origin crewed trips to space in 2021. So it is feasible that if Blue Origin launches a flight in September or October, then the second flight could launch closer to the holiday season.

Blue Origin will make cargo launches in addition to crewed flights this year, according to Cornell. So far, the company has made nine cargo flights so far.

Unlike SpaceX, these cargo flights are sub-orbital, rather than missions designed to place payloads in orbit.

Blue Origin also plans to work with NASA on the space agency’s Suborbital Crew program, according to Cornell.