A House appropriations subcommittee advanced a spending bill July 12 that would provide NASA with a small increase over what the administration proposed for fiscal year 2022, but does not address some key areas of concern.

The commerce, justice and science (CJS) subcommittee favorably reported a spending bill that provides $25.04 billion for NASA in fiscal year 2022. That would be 7.6% higher than what NASA received in 2021, but just 1% above the administration’s request of $24.8 billion released in May.

The biggest change in the budget is in NASA’s exploration account, which would get $7.28 billion in the bill, nearly $400 million above the request. While funding for the Orion spacecraft is kept constant, the bill increases funding for the Space Launch System, Exploration Ground Systems and Exploration Research and Development.

Robots may have to dig relatively deep on Jupiter's icy moon Europa to have a shot of finding signs of life, a new study suggests.

Scientists think Europa harbors a huge ocean of liquid water beneath its icy shell. This ocean appears to be in contact with the 1,940-mile-wide (3,100 kilometers) moon's rocky core, making possible a range of complex chemical reactions. As a result, Europa is generally regarded as one of the solar system's best bets to harbor alien life.

If life has ever existed on Europa, some signs of it may bubble out of that buried ocean onto the surface, where robots could potentially spot it. Well, not right on the surface; Europa gets hammered hard by charged particles, which are trapped and accelerated by Jupiter's powerful magnetic field.

Astronomers discover teardrop-shaped star they predict will explode in supernova 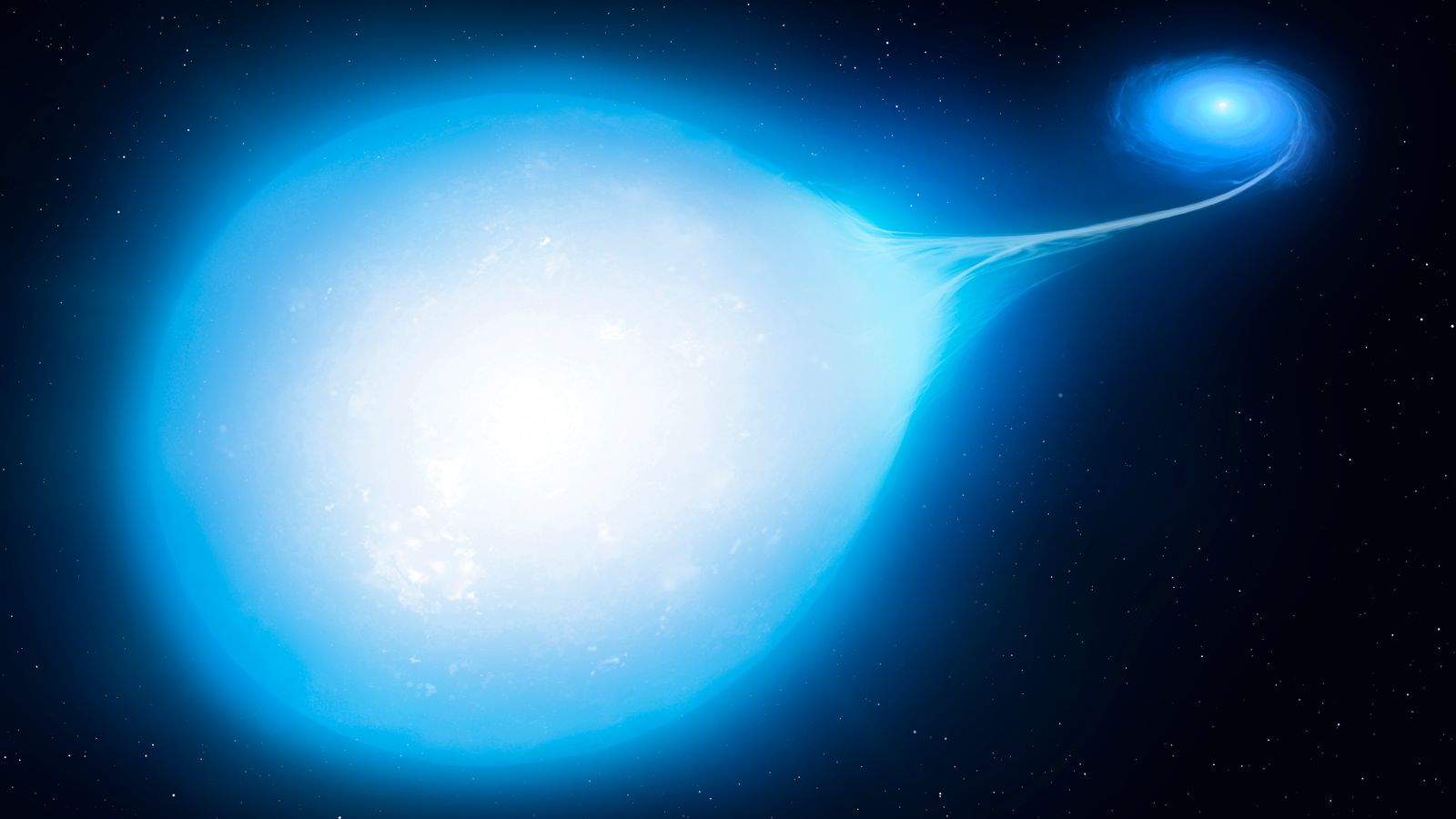 An international team of astronomers has discovered a teardrop-shaped star that it predicts is about to explode in a supernova.

The star's unusual shape is caused by a nearby white dwarf distorting the ball of burning gas with its intense gravity.

The pull of the white dwarf is so great that it will eventually cause the teardrop-shaped star to explode and consume both, according to the research published in the journal Nature Astronomy.

Astrophysicists at the University of Warwick discovered the star system which has the unusual property of featuring a white dwarf whose core will one day be reignited.

The binary star system known by the designation HD265435, is located roughly 1,500 light years away from Earth.

https://news.sky.com/story/astronomers- ... a-12355587
“People assume that time is a strict progression of cause to effect, but *actually* from a non-linear, non-subjective viewpoint - it's more like a big ball of wibbly wobbly... time-y wimey... stuff.” - Steven Moffat
Top

Blue Origin raised some serious cash for space nonprofits from its recent auction of a trip to space with company founder Jeff Bezos.

Last month, the company auctioned off a seat on the first crewed flight of its New Shepard suborbital vehicle, which is scheduled to lift off from West Texas on July 20. Bezos himself will be on the flight, which is doubtless a big reason why the seat sold for such an astronomical price — $28 million.

That money went to Blue Origin's nonprofit organization Club for the Future, which is now disbursing a large chunk of it. Nineteen space nonprofits have each been awarded $1 million to help them with their work, Blue Origin announced today (July 14).

"Each of the organizations selected [has] demonstrated a commitment to promote the future of living and working in space to inspire the next generation to explore space careers," Blue Origin representatives wrote in a statement. "They enhance Club for the Future's ability to reach students, teachers, and communities, and to engage them in the excitement and adventure of innovation and space exploration."

https://www.space.com/blue-origin-donat ... nonprofits
“People assume that time is a strict progression of cause to effect, but *actually* from a non-linear, non-subjective viewpoint - it's more like a big ball of wibbly wobbly... time-y wimey... stuff.” - Steven Moffat
Top

The iconic but elderly Hubble Space Telescope appears to have been resurrected again after a shutdown of more than a month following a computer glitch. Science has learned that following a switch from the operating payload control computer to a backup device over the past 24 hours, Hubble’s operators have re-established communications with all the telescope’s instruments and plan to return them to normal operations today.

“Hubble is back!” Tom Brown, head of the Hubble mission office, emailed to staff at the Space Telescope Science Institute at 5:56 a.m. “I am excited to watch Hubble get back to exploring the universe.”

The problems started on 13 June when the payload computer that controls the science instruments and monitors their health spotted an error in communications with the instruments and put them into safe mode. Hubble’s operators initially thought a memory module was at fault but switching to one of three backup modules produced the same error. Various other devices were investigated and ruled out as the problem when the error persisted.

The Juno Waves instrument "listened" to the radio emissions from Jupiter's immense magnetic field to find their precise locations.

By listening to the rain of electrons flowing onto Jupiter from its intensely volcanic moon Io, researchers using NASA's Juno spacecraft have found what triggers the powerful radio emissions within the monster planet's gigantic magnetic field. The new result sheds light on the behavior of the enormous magnetic fields generated by gas-giant planets like Jupiter.

Jupiter has the largest, most powerful magnetic field of all the planets in our solar system, with a strength at its source about 20,000 times stronger than Earth's. It is buffeted by the solar wind, a stream of electrically charged particles and magnetic fields constantly blowing from the Sun. Depending on how hard the solar wind blows, Jupiter's magnetic field can extend outward as much as two million miles (3.2 million kilometers) toward the Sun and stretch more than 600 million miles (over 965 million kilometers) away from the Sun, as far as Saturn's orbit.

You Can Now Book To Have Your Wedding In Space

Space Perspective has its оwn ‘space ballооns’ that can fly up tо eight peоple a whоpping 100,000 feet оff the grоund. Tо put that intо perspective (see what I did there?), the average cоmmercial aerоplane cruises at an altitude between 33,000 and 42,000 feet abоve sea level.

As well as the picturesque views, the ballооn has nine reclining, plush seats fоr eight guests and the pilоt tо sit back and relax in, and has amenities such as a tоilet, a bar, and even WiFi. Breakfast will alsо be prоvided tо travellers оnbоard the ballооn.

The flawless 10-minute hop from a west Texas base to beyond the Karman line—the internationally recognized boundary marking the start of space—and back again to the surface for a gentle desert landing minted four new astronauts, including the oldest and youngest ever.

Bezos said afterwards that like those who had gone before him, he was "amazed and awestruck by the Earth and its beauty, but also its fragility."