Discuss the evolution of human culture, economics and politics in the decades and centuries ahead
Post Reply
7 posts • Page 1 of 1

Let's talk about the next Industrial Revolution. Perhaps one already underway.

We've already seen three before, as I've discussed at many different points on the old forum. However, I do mean to bring my words to this forum. That'll be another post. 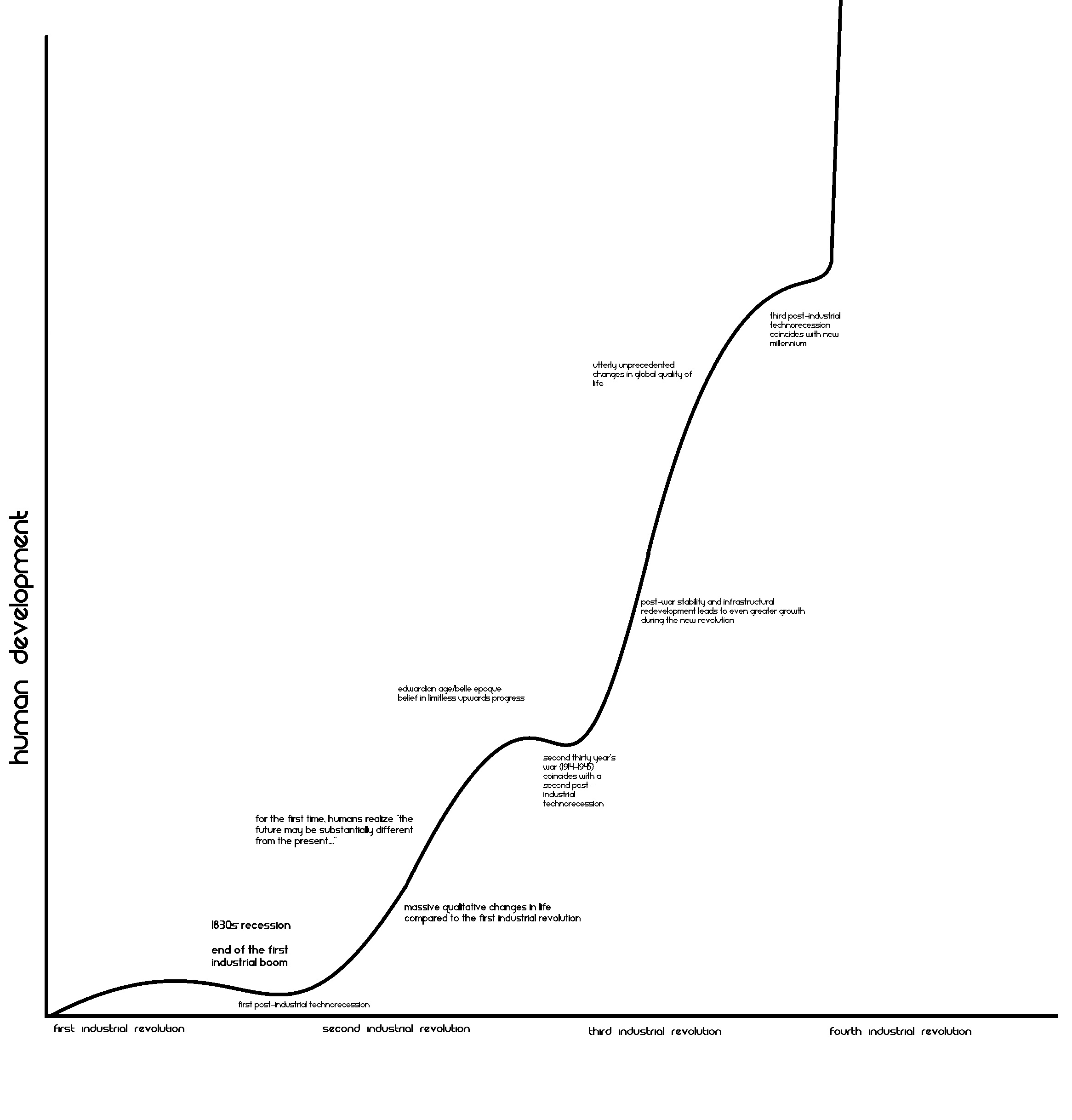 Ever since the early 2000s, people have felt like technological progress has slowed down. It makes sense to feel this way. What happened in the late 90s? In 1996 alone, we saw Dolly the Sheep being cloned, DeepBlue beating Gary Kasparov, the identification of a black hole at the center of our own galaxy, and more, including extremely rapid growth of the internet. GPS went from a high-tech military standard to a mainstay of every SUV in America, and we also saw the rise of 3D gaming— which was a big deal at the time. Plus who could forget the International Space Station, finally taking shape? All this was leading up to the much-hyped new millennium, heralded as the dawn of a sci-fi age. Heck, we even kicked off the 2000s with a delightfully Japanese robot called "ASIMO" who looked like a spaceman.

Once we actually crossed over into the new millennium, however, everything seemed to fizzle. If you were following the tech magazines and futurist books, you saw a few amazing things in the background— most notably the completion of the Human Genome Project. But otherwise nothing felt different. Instead of our glorious sci-fi diamond age, we got the Iraq War. The present felt boring and you had to stretch innovations past the breaking point just to convince yourself it wasn't disappointing. Think of Ray Kurzweil's sad proclamation that "AI is all around us" in the form of phone apps, dishwashers, and automatic lights. Very disappointing.

But the truth was that the future we wanted was currently being planted and we were merely being impatient like someone expecting an oak tree to mature in a day— not helped by our shortening attention spans and the quickening pace of modern life. What we didn't know in the early 2000s was that that burst of innovation in the 90s was actually the dying gasps of the Third Industrial Revolution.

All the pieces have been coming together and we've had a front row seat this whole time: revolutions in energy, material science, data science, transportation, space, genetic engineering, and more. It's all been happening in the background, commented on mainly by futurology obsessives and skeptics who looked back at the previous 20 years and said "This is nothing and will lead to nothing."

Probably the single most important factor going forward will be artificial intelligence. Anything could have been the trigger to the Fourth Industrial Revolution, but the single most likely one is AI. We're currently waiting for something known as "TAI" or "Transformative Artificial Intelligence." Not my term.

TAI is any sort of methodology that leads to a large-scale impact on society, politics, and economics. Think of the collective impact of expert systems, Siri, stock trading algorithms, autocorrect, and deepfakes. Imagine all that done by one network. This is TAI. It needn't be AGI. Indeed, the whole reason behind coining the term TAI was to create an alternative to delineate difference between AI that leads to world-changing upheaval and general AI of science fiction fame. The next generation of language models are likely to be transformative. GPT-3 and LaMDA already show such potential despite their lack of multimodality and limited generality. But they're not transformative. We can't even widely use them.


TAI may be the start and it could happen within the year. And clearly, it doesn't take much imagination to figure out that the central use case will be for automation.

But some other technologies could trigger changes.

For example: room-temperature superconductors. We've already developed two. But both require inconceivably high pressures and aren't metastable. If we can find that magic material that lifts into the air in the presence of a magnetic field even at beachgoing or even steamy temperatures, all our energy woes are solved overnight. We will see revolutions in transport: electric vehicles could run almost indefinitely; passenger jets could become fully electric; rotors will become incredibly efficient; maglevs and vac vactrains would become widespread if not the norm; etc. etc

And we could terraform Mars for a few billion dollars— it would be cheaper to restore its magnetic field and warm it up than to send even a probe to the surface. This artificial magnetic field would be able to remain in place for billions of years— longer than Mars' natural magnetic field lasted. A room-temperature supercomputer would hold a charge for longer than the lifespan of the universe without any loss other than pure material degradation.

And fusion becomes feasible to boot, which may open us up to even higher energy physics like antimatter and kugelblitzes in the long term.


One central aspect of every technological revolution before now has been the matter of connectivity. We've always tried connecting more humans at an ever higher bandwidth, and we've been successful. What's next after smartphones? It seems obvious...

The rise of brain-computer interfaces is a revolution no one in the mainstream's expecting— most still think it all to be a thousand years away— and it's going to lead to some of extreme changes in a very short amount of time. Getting rid of the middle man to allow for direct brain communication with the outside world, among all the other effects of having direct access to the brain, is something beyond imagination.

Honestly, I can't do this topic justice in one post. I didn't even get to talk about genetic engineering, the massive changes in material science with the rise of metamaterials, graphene, and nanofibers, or even the rise of advanced space industry.

But I did want to dwell on just some of what excited me the most and give the Culture & Economics subforum a major post.
And remember my friend, future events such as these will affect you in the future
Top

Interesting predictions (especially when we look back at them in years to come), but I think this:

is here to stay. All these features of the "Fourth Industrial Revolution" might be theoretically feasible, as in scientists and engineers could figure out in theory how to build all of these things, but without the resources and energy to make use of that knowledge, what can we really expect? This reminds me of nothing so much as the primitive computer (Antikythera mechanism) built by the ancient Greeks. Sure enough, they figured out how to build a primitive computer, but without the resources that successor civilisations were to discover (fossil fuels), there wasn't anything they could do with that knowledge beyond piecing together an interesting novelty. A lot of the hopes for this "Fourth Industrial Revolution" seem to revolve around exactly this:

If we can find that magic material that lifts into the air in the presence of a magnetic field even at beachgoing or even steamy temperatures, all our energy woes are solved overnight.

Yeah, if only we can find this magic material...
But until we do, we're going to have to come to terms with the hard limits imposed on us by the earth's ecology and the laws of physics. IMO, efforts towards the next round of major innovations ought to focus on how we can best conserve energy, rather than finding ever more innovative ways to consume more of it.
Top

How China Is Using AI to Fuel the Next Industrial Revolution

For many years now, China has been the world’s factory. Even in 2020, as other economies struggled with the effects of the pandemic, China’s manufacturing output was $3.854 trillion, up from the previous year, accounting for nearly a third of the global market.

But if you are still thinking of China’s factories as sweatshops, it’s probably time to change your perception. The Chinese economic recovery from its short-lived pandemic blip has been boosted by its world-beating adoption of artificial intelligence (AI). After overtaking the U.S. in 2014, China now has a significant lead over the rest of the world in AI patent applications. In academia, China recently surpassed the U.S. in the number of both AI research publications and journal citations. Commercial applications are flourishing: a new wave of automation and AI infusion is crashing across a swath of sectors, combining software, hardware and robotics.

As a society, we have experienced three distinct industrial revolutions: steam power, electricity and information technology. I believe AI is the engine fueling the fourth industrial revolution globally, digitizing and automating everywhere. China is at the forefront in manifesting this unprecedented change.

There is no technorecession. Really. And there hasn't been. That's just nonsense.

The 1830s was also a time of change (however small for current standards). During the 1830s, Charles Darwin was making observations on plants and animals. Austins of Derry department store was opened in 1830. Lawnmower was invented by Edwin Budding in 1830. The first enzyme - diastase was discovered by Anselme Payen in 1833. Charles Babbage begun the conceptual design of an "analytical engine" - a mechanical forerunner of the modern computer in 1834. Michael Faraday published his research on Faraday's laws of electrolysis in 1834. A railway was opened between Brussels and Mechelen in 1835. Samuel Colt patented the Colt revolver - the first revolving barrel multishot firearm in 1836. London and Greenwich Railway opened its first section in 1836. The telegraph was invented by Samuel Morse in 1837. Hans Christian Andersen published his first collection of fairy tales in 1837. Friedrich Bessel made the first accurate measurement of distance to a star in 1838. The daguerreotype was first introduced to the public in 1839. Charles Goodyear vulcanized rubber in 1839. Steam shovel was discovered by William Otis in 1839.

The 1920s was huge in raising people's standards of living. And technological innovation was only accelerating, even during the 30s and 40s.

Yes, progress certainly hasn't been as great as 1990s magazines and TV shows used to show, but it's substantial nonetheless. Please compare Apple's first iBook from 1999 and Apple M1 MacBook from 2020. Or Ericsson T28 to OnePlus Nord N10 5G. The number of computers an ordinary house has doubles every 6 years. That's certainly true for me, it went from 4 (one desktop PC, two mobile phones and a computer dictionary translator) in 2002 to 32 in 2020. 35 today.
Top

Subjectively I feel like we are in a recession and that things are moving very slowly. But objectively I know that's not the case.
Top

In just 15 years we went from this 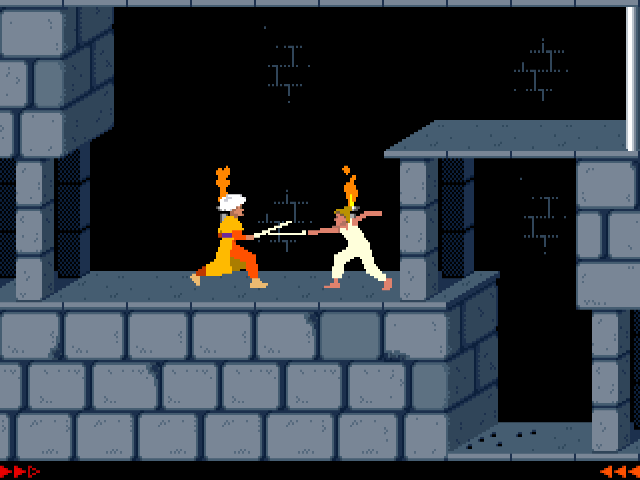 Over 70% of the global population will have mobile connectivity by 2023. 5G devices and connections will be over 10 percent of global mobile devices and connections by 2023. By 2023, global fixed broadband speeds will reach 110.4 Mbps, up from 45.9 Mbps in 2018. Nearly 300 million mobile applications will be downloaded by 2023. Globally, 299.1 billion mobile applications will be downloaded by 2023. Social media, gaming and business applications will be the most popular downloads. There will be 3.6 networked devices per capita by 2023, up from 2.4 networked devices per capita in 2018. There will be 29.3 billion networked devices by 2023, up from 18.4 billion in 2018. By 2023, the consumer share of the total devices, including both fixed and mobile devices, will be 74%, with business claiming the remaining 26%. Consumer share will grow at a slightly slower rate, at a 9.1% CAGR relative to the business segment, which will grow at a 12% CAGR.

Half of all economic development happened after 2005: 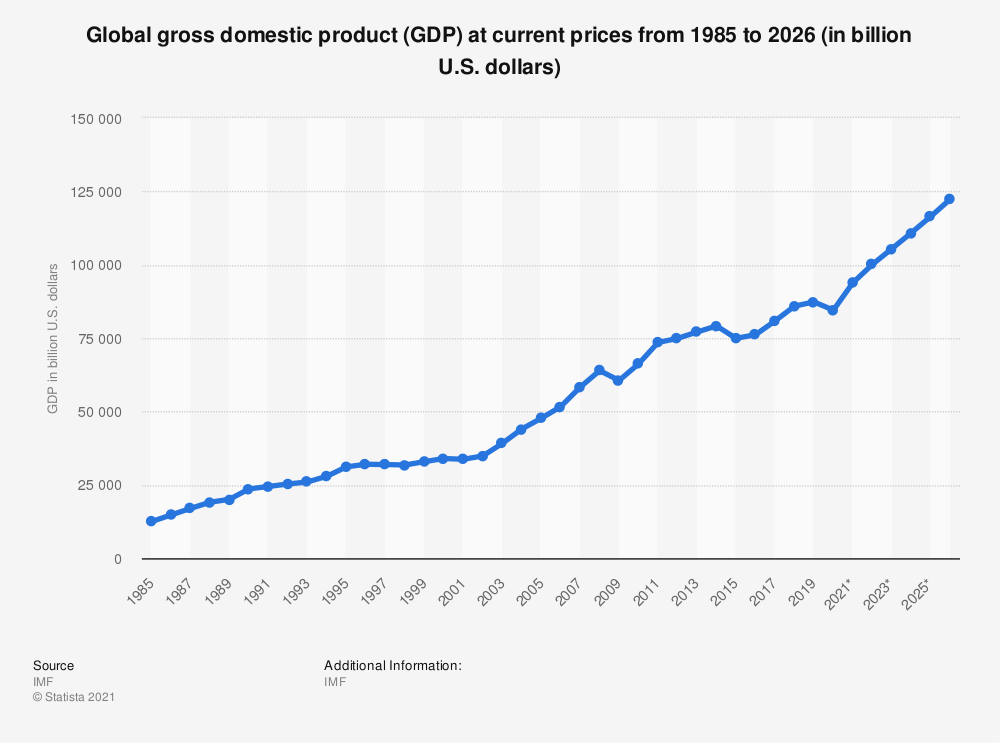 Despite the 2008 economic crisis, 2015 global trade slowdown and 2020 Covid-19 pandemic. There is no revolution, there is only evolution. Robots are already automating, it is happening gradually, but exponentially.