Got something to say about the past? Say it here!
Post Reply
29 posts

(The Nation)Ten years ago this month, Occupy Wall Street unexpectedly inaugurated a new wave of protest. The domestic manifestation of a worldwide explosion of digitally networked social movements, it scaled up rapidly, attracting enormous public and media attention. But the protesters were evicted from New York City’s Zuccotti Park and other occupied spaces after only a few months, and Occupy dissipated soon afterward. Some commentators have dismissed it as a meteoric flash in the pan, while others have criticized its “horizontalist” structure and lack of concrete demands.

After speaking recently with more than 20 activists who were centrally involved in the movement, we beg to differ with such negative assessments. “Occupy wasn’t a blip, it was a spark!” declared one, veteran organizer Nastaran Mohit. “It was a turning point, a spark that led to many fires.”

(The American Prospect) Friday is the tenth anniversary of the beginning of Occupy Wall Street, a monthslong activist annexation of public space around the world. Almost to this day, the media depicts Occupy as an inchoate mass of discontented young people with no real ideas or specifics or strategy to bend politics to their liking. And yet in 2011, when it began, the Democratic Party’s standard-bearer was trying to figure out how to cut Social Security and raise the Medicare eligibility age in a grand bargain with Republicans over the deficit. Today, the Democratic Party’s standard-bearer, the previous standard-bearer’s vice president, is trying to spend trillions of dollars to give people universal pre-kindergarten; free community college; expanded health care, child care, and elder care benefits; and a Child Tax Credit that amounts to a universal basic income for children.

This shift within Democratic politics would not have been possible without a progressive movement that sprang in large part from Occupy, both in its willingness for confrontation and in its analysis of how the economy was not working for most people. Occupy has direct linkages to the movement to fight inequality, the movement to cancel student debt, and both of Bernie Sanders’s presidential campaigns, which were staffed by a number of Occupy veterans. Occupy also demonstrated how the state can crush dissenters of all kinds, giving rise to further scrutiny of police brutality.

One of the first people in Zuccotti Park in New York City, the original Occupy encampment, was Winnie Wong, a founding organizer who went on to work on both Sanders campaigns, and now continues as a media maker and online activist. She reflected on ten years since Occupy and how it precipitated social and political change. (See link to article above this quote box for the interview with Winnie Wong).


(The Atlantic) A decade before United Nations climate scientists issued a “code red for humanity,” the 20-year-old college junior Evan Weber joined several thousand protesters descending on Wall Street to declare a code red for democracy. At the height of the Great Recession, Weber and his generation saw the climate crisis staring them in the face, along with exploding wealth and income inequality, student debt, and housing and health-care costs. On September 17, 2011, they rebelled. Pointing a finger at banks, corporations, and the wealthiest 1 percent, whom they blamed for corrupting our democracy by buying elections to control the legislative process, the protesters camping in Zuccotti Park issued a clarion call for justice: “We are the 99 percent.” That fall, hundreds of thousands of people joined Occupy Wall Street and its partner occupations in more than 600 U.S. towns and cities. Overnight, the movement created a new narrative around economic inequality—and seized the public’s attention. Polls showed that a wide majority of Americans supported Occupy.

Then, almost as quickly as it had arrived, the movement appeared to vanish, leaving behind little except for the language of the 99 and the 1 percent. In the decade since, the wealth gap has only widened. The rules haven’t changed; our system remains rigged to benefit those at the top. And yet, on the tenth anniversary of Occupy Wall Street, it’s clear that the movement has had lasting, visible impacts on our political and cultural landscape—igniting an era of resistance that has redefined economic rights, progressive politics, and activism for a generation.

The Bradford City stadium fire occurred during an English League Third Division match between Bradford City and Lincoln City at the Valley Parade stadium on Saturday, 11 May 1985, killing 56 spectators and injuring at least 265. The stadium, long-established home to Bradford City Football Club, was known for its antiquated design and facilities, which included the wooden roof of the main stand. Previous warnings had also been given about a major build-up of litter in the cavity below the seats in the stand. The stand had been officially condemned and was due to be replaced with a steel structure after the season ended.

The match against Lincoln City, the final game of that season, had started in a celebratory atmosphere with the home team receiving the Football League Third Division trophy. At 3.40 p.m., TV commentator John Helm remarked upon a small fire in the main stand; in less than four minutes, with the windy conditions, it had engulfed the whole stand, trapping some people in their seats. In the mass panic that ensued, fleeing crowds escaped on to the pitch but others at the back of the stand tried to break down locked exit doors to escape, and many were burnt to death at the turnstiles gates, which had also been locked after the match had begun. There were many cases of heroism, with more than 50 people later receiving police awards or commendations for bravery.

The disaster led to rigid new safety standards in UK stadiums, including the banning of new wooden grandstands. It was also a catalyst for the substantial redevelopment and modernisation of many British football grounds within the following thirty years. Bradford City continues to support the burns unit at the University of Bradford as its official charity.

'Another World is Possible': How Occupy Wall Street Reshaped Politics and Kicked Off a New Era of Protest

Here is a Democracy Now! show on this subject presented via Alternet:

Fifty Years Ago, the First CT Scan Let Doctors See Inside a Living Skull – Thanks to an Eccentric Engineer at the Beatles’ Record Company
September 30, 2021

(The Conversation) The possibility of precious objects hidden in secret chambers can really ignite the imagination. In the mid-1960s, British engineer Godfrey Hounsfield pondered whether one could detect hidden areas in Egyptian pyramids by capturing cosmic rays that passed through unseen voids.

He held onto this idea over the years, which can be paraphrased as “looking inside a box without opening it.” Ultimately he did figure how to use high-energy rays to reveal what’s invisible to the naked eye. He invented a way to see inside the hard skull and get a picture of the soft brain inside.

The first computed tomography image – a CT scan – of the human brain was made 50 years ago, on Oct. 1, 1971. Hounsfield never made it to Egypt, but his invention did take him to Stockholm and Buckingham Palace.

Godfrey Hounsfield’s early life did not suggest that he would accomplish much at all. He was not a particularly good student. As a young boy his teachers described him as “thick.”

He joined the British Royal Air Force at the start of the Second World War, but he wasn’t much of a soldier. He was, however, a wizard with electrical machinery – especially the newly invented radar that he would jury-rig to help pilots better find their way home on dark, cloudy nights.

Cesar and the leaders of the NFWA believed it would be years before their fledgling union was ready for a strike. But he also knew how growers historically pitted one race against another to break field walkouts. Cesar’s union voted to join the Filipino workers’ walkouts on Mexican Independence Day, September 16, 1965. From the beginning this would be a different kind of strike.


One could easily start and populate a thread all to itself on the impact and importance of this strike on the agricultural industry, particularly in California.
Top

Chavez was of course inspired by Gandhi.

(The Logical Indian) October 2 is a celebrated day in India, honouring the rise of brave freedom fighters like Mahatma Gandhi and Lal Bahadur Shastri. The courageous act of Indians during the British era made the world gape at a country that celebrates unity in diversity.

On the birth anniversary of the Father of the Nation, Mahatma Gandhi, and former Prime Minister Lal Bahadur Shastri, it is imperative to stop and reflect if the present generation carried their rich legacy forward. Like the whole world, India too is reeling under a massive health crisis, a widening economic budget gap, and not to forget, the severe farmer protests that have been going on for months now.

'City Of The Dead'

The uncanny similarity in today's scenario is gut-wrenching. After Independence, when the hustling and bustling national capital was reduced to being the 'city of the dead', owing to the communal riots in neighbouring states, Gandhi had said, "if we do not cure ourselves of this insanity, we shall lose the freedom we have won."

Gandhi raised the question of moral responsibility and reminded the party in power of its duty towards its citizens, irrespective of their religion. On January 13, 1948, Gandhi announced his fast unto death to address the conscience. Gandhi's fast was motivated by the cause of curbing the riots taking place in the dark corners of the city. As fate would have it, this fast was his last.*

A few years later, when Lal Bahadur Shastri took oath as the Prime Minister after the shocking demise of Jawaharlal Nehru, he popularised the slogan 'Jai Jawan, Jai Kisan' to emphasize the importance of self-reliance and self-sustenance as pillars of a strong nation. He highlighted the crucial role played by farmers in the country and stressed on the need to empower them. Shastri always relied on moral principles, and his nation was more important to him than his family. During the 1965 Indo-Pak war, when there was an acute food shortage, he asked his family to skip dinner because he wanted to feel what his countryme

caltrek's comment: If "the present generation carried their rich legacy forward" was a question that originally inspired me to start a thread on India in the old Future Timeline forum.
Top

Warship Sunk in 1927 Collision Found on Seabed off Shimane
by Tadashi Sugiyama and Fumi Yada
October 2, 2021

(The Asahi Shimbun) MATSUE--For more than 90 years, the final resting place of the Imperial Japanese Navy destroyer Warabi was unknown after a collision with a light cruiser during a nighttime drill in the Sea of Japan.

Now, the likely remains of the battleship, whose hull was split into bow and stern sections, have been discovered at two seafloor sites by a local group commemorating the tragedy.

Two pairs of warships collided in succession off Mihonoseki, part of today’s Matsue, capital of Shimane Prefecture, in August 1927 during the exercise under lightless conditions.

The Warabi sank following the collision, while the Ashi destroyer collided with another light cruiser and was seriously damaged. A total of 119 people died.

Some have called the Mihonoseki incident the maritime equivalent to a well-known tragedy during a military drill at Mount Hakkodasan in Aomori Prefecture in 1902. A group of 199 members of an Imperial Japanese Army infantry regiment died during a march in the snow. 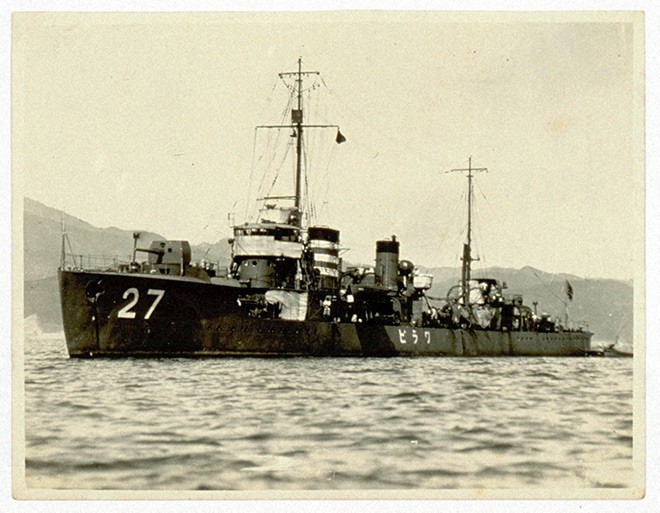