Got something to say about the past? Say it here!
Post Reply
17 posts

A long-lost piece of Stonehenge that was taken by a man performing restoration work on the monument has been returned after 60 years, giving scientists a chance to peer inside a pillar of the iconic monument for the first time.

In 1958, Robert Phillips, a representative of the drilling company helping to restore Stonehenge, took the cylindrical core after it was drilled from one of Stonehenge's pillars – Stone 58. Later, when he emigrated to the United States, Phillips took the core with him.

Because of Stonehenge's protected status, it's no longer possible to extract samples from the stones. But with the core's return in 2018, researchers had the opportunity to perform unprecedented geochemical analyses of a Stonehenge pillar, which they described in a new study.

They found that Stonehenge's towering standing stones, or sarsens, were made of rock containing sediments that formed when dinosaurs walked the Earth. Other grains in the rock date as far back as 1.6 billion years.

https://www.sciencealert.com/rediscover ... -pillars-2
“People assume that time is a strict progression of cause to effect, but *actually* from a non-linear, non-subjective viewpoint - it's more like a big ball of wibbly wobbly... time-y wimey... stuff.” - Steven Moffat
Top

1,000-year-old remains in Finland may be non-binary iron age leader 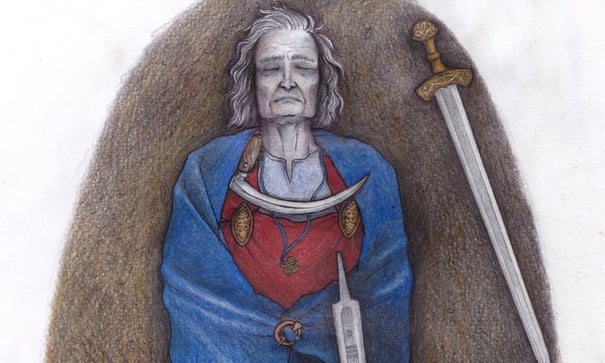 Modern analysis of a 1,000-year-old grave in Finland challenges long-held beliefs about gender roles in ancient societies, and may suggest non-binary people were not only accepted but respected members of their communities, researchers have said.

According to a peer-reviewed study in the European Journal of Archaeology, DNA analysis of remains in a late iron age grave at Suontaka Vesitorninmäki in Hattula, southern Finland, may have belonged to a high-status non-binary person.

First discovered in 1968 during building work, the grave contained jewellery in the form of oval brooches as well as fragments of woollen clothing suggesting the dead person was dressed in “a typical feminine costume of the era”, the researchers said.

But unusually, the grave also held a hiltless sword placed on the person’s left side, with another sword, probably deposited at a later date, buried above the original grave – accoutrements more often associated with masculinity.

https://www.theguardian.com/world/2021/ ... rchers-say
“People assume that time is a strict progression of cause to effect, but *actually* from a non-linear, non-subjective viewpoint - it's more like a big ball of wibbly wobbly... time-y wimey... stuff.” - Steven Moffat
Top

A team of researchers with the Israel Antiquities Authority has found evidence of a strong earthquake occurring in the city of Jerusalem approximately 2,800 years ago. The group has posted their initial findings on their Facebook page.

Prior research had uncovered evidence of a large earthquake in Israel in the mid-eighth century B.C. at sites such as Hatzor and Tell es-Safi/Gath, but no evidence had been found in Jerusalem. In this new effort, the researchers found evidence of damage from the time at a dig site in the City of David National Park, along with references to the earthquake in the Hebrew Bible.


King's research has helped uncover new evidence showing the portrayal of the execution of captives in the arena by throwing them to lions. The evidence follows the discovery of an elaborately-decorated Roman bronze key handle.

The handle, discovered by archaeologists in Leicester, portrays a "Barbarian" grappling with a lion, together with four naked youths cowering in terror.

The key handle was discovered by University of Leicester Archaeological Services (ULAS), buried below the floor of a late Roman town house excavated in the city in 2016. After conservation, this unique object was studied at King's and the findings are now published in the journal Britannia.

Dr. John Pearce, Senior Lecturer in Archaeology, (Classics), is a co-author of the study, and helped decipher the key handle.

(The Conversation) Choices beyond celibacy

Pre-modern Christian women had options besides celibacy as well, although the state, the church and mediocre medicine limited their reproductive choices.

In 211, the Roman emperors Septimius Severus and Caracalla made abortion illegal. Tellingly, though, Roman laws surrounding abortion were centrally concerned with the father’s right to an heir, not with women or fetuses in their own right. Later Roman Christian legislators left that largely unchanged.

Conversely, Christian bishops sometimes condemned the injustice of laws regulating sex and reproduction. For example, the bishop Gregorios of Nazianzos, who died in 390, accused legislators of self-serving hypocrisy for being lenient on men and tough on women. Similarly, the bishop of Constantinople, Ioannes Chrysostomos, who died in 407, blamed men for putting women in difficult situations that led to abortions.

…But over time, these legal and religious opinions did not seem appreciably to affect women’s reproductive choices. Rather, pregnancy prevention and termination methods thrived in premodern Christian societies, especially in the medieval Roman Empire. For example, the historian Prokopios of Kaisareia claims that the Roman Empress Theodora nearly perfected contraception and abortion during her time as a sex worker, and yet this charge had no impact on Theodora’s canonization as a saint.

Some evidence even indicates that pre-modern Christians actively developed reproductive options for women. For instance, Christian physicians, like Aetios of Amida in the sixth century and Paulos of Aigina in the seventh, provided detailed instructions for performing abortions and making contraceptives. Their texts deliberately changed and improved on the medical work of Soranos of Ephesos, who lived in the second century. Many manuscripts contain their work, which indicates these texts circulated openly.

(Futurity) In the Middle Bronze Age (about 3,600 years ago or roughly 1650 BCE), Tall el-Hammam was ascendant. Located on high ground in the southern Jordan Valley, northeast of the Dead Sea, the settlement in its time had become the largest continuously occupied Bronze Age city in the southern Levant, having hosted early civilization for a few thousand years.

“It’s an incredibly culturally important area,” says James Kennett, emeritus professor of earth science at the University of California, Santa Barbara. “Much of where the early cultural complexity of humans developed is in this general area.”

A favorite site for archaeologists and biblical scholars, the mound hosts evidence of culture all the way from the Chalcolithic, or Copper Age, all compacted into layers as the highly strategic settlement was built, destroyed, and rebuilt over millennia.

But there is a 1.5-meter interval in the Middle Bronze Age II stratum that caught the interest of some researchers for its “highly unusual” materials. In addition to the debris one would expect from destruction via warfare and earthquakes, they found pottery shards with outer surfaces melted into glass, “bubbled” mudbrick, and partially melted building material, all indications of an anomalously high-temperature event, much hotter than anything the technology of the time could produce.

This sounds very much like a program that was recently featured on the Science Channel:

(Science Alert) Modern-day imaging technology is able to uncover ancient buildings and structures not visible on the surface, and we just got another excellent example: the discovery of a hidden neighborhood in one of the biggest historical Maya cities.

The city in question is Tikal, now in Guatemala. Thought to have been one of the most dominant settlements in the ancient Maya empire, particularly between 200-900 CE, at its peak it could have had as many as 90,000 people living there.

Using LIDAR scanning equipment, researchers found evidence of development under what was thought to be a natural area. What's more, the hidden ruins look to match the style of buildings in Teotihuacan – a sprawling metropolis established centuries before the rise of the Aztecs, built by a largely unknown culture.