Got something to say about the past? Say it here!
Post Reply
57 posts

(Science Alert) Raging wildfires tore through Antarctica 75 million years ago, back when dinosaurs still roamed the Earth, a new study finds.
During the late Cretaceous period (100 million to 66 million years ago), one of the warmest periods on Earth, Antarctica's James Ross Island was home to a temperate forest of conifers, ferns, and flowering plants known as angiosperms, as well as to a slew of dinosaurs.

But it wasn't a total paradise; ancient paleo-fires burned parts of those forests to a crisp, leaving behind charcoal remnants that scientists have now scooped up and studied.

"This discovery expands the knowledge about the occurrence of vegetation fires during the Cretaceous, showing that such episodes were more common than previously imagined," study lead researcher Flaviana Jorge de Lima, a paleobiologist at Federal University of Pernambuco in Recife, Brazil, said in a statement.

The finding marks the first evidence on record of a paleo-fire on James Ross Island, a part of the Antarctic Peninsula that now sits below South America. 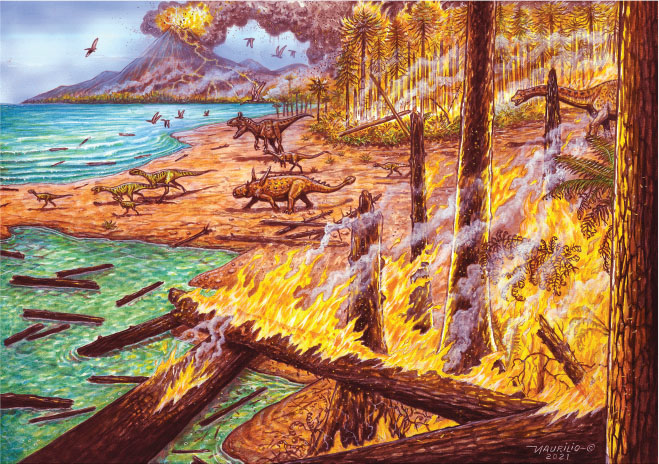 Reconstruction of paleo-wildfires in Antarctica during the Cretaceous.
Maurilio Oliveira
Top

(Universe Today) It’s no secret that Earth was bombarded with plenty of meteors for billions of years during the solar system’s early formation. Estimates vary on how much material impacted the planet, but it had a considerable effect on the planet’s atmosphere and the evolution of life. Now, a new study from a team led by researchers at the Southwest Research Institute puts the number at almost ten times the number of previously estimated impacts. That much of a difference could dramatically change how geologists and planetary scientists view the early Earth.

Early on, the solar system was much more populated with space rocks. Those space rocks were known to hit Earth, and speculation abounds about what happened when they did so. Earth eventually partially cleaned out its orbital path, culminating in the period called the Late Heavy Bombardment.

While the destructive power of that time period has been well documented, large asteroids continued to impact the Earth consistently for billions of years. When they did so, they formed “impact spherules” of molten rock that were thrown into the air, solidified, and then landed back on the Earth’s surface. They became distinct sand-grain-sized spherical components of the geological layers laid down when their impact happened.

There are multiple spherule layers in the geologic record, showing that impacts large enough to create sky-bound ejecta were common. More have been found recently, leading researchers to examine whether the newfound abundance of these spherule layers was accounted for in simulations of early asteroid bombardment.

It turns out they weren’t – current bombardment models resulted in about ten times fewer spherule layers that have been found in the geological record. Consequently, that implies up to ten times more major asteroid impacts in that time period than models had predicted


An international and multidisciplinary piece of research involving the participation of Universidad Complutense de Madrid (UCM) concludes with the discovery of the mineralised fossil remains of the oldest sponges in the world—530 million years old—in phosphate deposits in Fontanarejo (Ciudad Real).

These deposits were described for the first time some 50 years ago, but had not been studied in detail until now. Spicules were discovered among the fossil remains—units of silicon that make up the skeleton—of two types of sponges: hexactinillida and demosponges.

"It should be noted that some of the spicules are structured; in other words, connected to others, practically conserving the same position as the original organism", highlights Pablo Suárez, a researcher at the Department of Geodynamics, Stratigraphy and Paleontology at UCM, and one of the authors of the study published in Geological Magazine.

The sponges can have two types of skeleton: mineralised (as in the case of the sponges in Castile-La Mancha), composed of structured spicules or non-mineralised (formed of organic molecules that degrade).

^^^We used to have so-called "Dragonflies" that were fairly common to our local area. They were not all that much smaller than a bird, but not as large as the comparison shown above to a human.
Top

Fossils found in Chile are from a strange-looking dog-sized dinosaur species that had a unique slashing tail weapon, scientists reported Wednesday.

Some dinosaurs had spiked tails they could use as stabbing weapons and others had tails with clubs. The new species, described in a study in the journal Nature, has something never seen before on any animal: seven pairs of "blades" laid out sideways like a slicing weapon used by ancient Aztec warriors, said lead author Alex Vargas.

"It's a really unusual weapon," said Vargas, a University of Chile paleontologist. "Books on prehistoric animals for kids need to update and put this weird tail in there. ... It just looks crazy."

The plant-eating critter had a combination of traits from different species that initially sent paleontologists down the wrong path. The back end, including its tail weapon, seemed similar to a stegosaurus, so the researchers named it stegouros elengassen.