Got something to say about the past? Say it here!
Post Reply
26 posts

A cup of mud that has been buried beneath the floor of a cave for millennia has just yielded up the genome of an ancient human.

Analysis reveals traces of a woman who lived 25,000 years ago, before the last Ice Age; and, although we don't know much about her, she represents a significant scientific achievement: the feasibility of identifying ancient human populations even when there are no bones to recover.

The sample also yielded DNA from wolf and bison species, which an international team of scientists were able to place in the context of their population histories.

"Our results," they wrote in their paper, "provide new insights into the Late Pleistocene genetic histories of these three species and demonstrate that direct shotgun sequencing of sediment DNA, without target enrichment methods, can yield genome-wide data informative of ancestry and phylogenetic relationships."

The recovery of ancient DNA has typically relied rather a lot on bones, and luck. First, you need the bones to have survived, and survived intact enough to preserve DNA over many thousands of years.

https://www.sciencealert.com/a-human-ge ... -cave-dirt
“People assume that time is a strict progression of cause to effect, but *actually* from a non-linear, non-subjective viewpoint - it's more like a big ball of wibbly wobbly... time-y wimey... stuff.” - Steven Moffat
Top 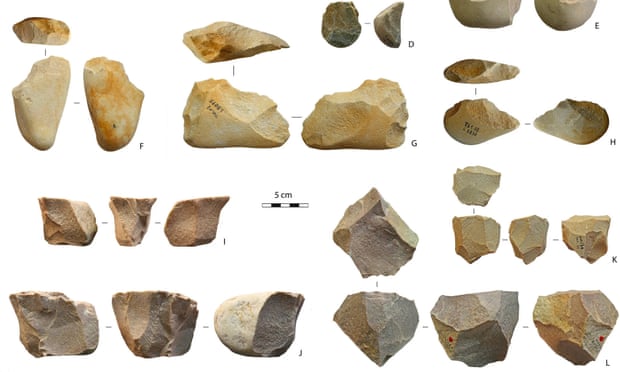 The find pushes back by hundreds of thousands of years the start date in north Africa of the Acheulian stone-tool industry, associated with the human ancestor Homo erectus, researchers told journalists in Rabat on Wednesday.

The discovery was made during excavations at a quarry on the outskirts of Morocco’s economic capital, Casablanca.

This “contributes to enriching the debate on the emergence of the Acheulian in Africa,” said Abderrahim Mohib, the co-director of the Franco-Moroccan prehistory of Casablanca programme.

https://www.theguardian.com/world/2021/ ... -13m-years
“People assume that time is a strict progression of cause to effect, but *actually* from a non-linear, non-subjective viewpoint - it's more like a big ball of wibbly wobbly... time-y wimey... stuff.” - Steven Moffat
Top

A team of researchers from Italy, Spain and Georgia has found the remains of ancient hunting dogs at a dig site in what is now modern Georgia. In their paper published in the journal Scientific Reports, the group describes the fossils they found, their attempts to classify them and the possibility of the dogs interacting with early human ancestors.

Prior research has shown that a type of ancient hunting dog evolved millions of years ago in parts of Asia and then migrated into parts of Europe and Africa. Prior evidence also has shown that the dogs were quite large and likely engaged in social behaviors such as pack hunting. Prior research has also led to the discovery of the remains of ancient human ancestors near the Georgian village of Dmanisi—the oldest ever found outside of Africa. In this new study, the researchers found evidence of the hunting dogs living in the vicinity of the human ancestors at Dmanisi approximately 1.8 million years ago.

Mapping the Biography of an Ancient Wooly Mammoth
by Tessa Koumoundouros
August 12, 2021

(Science Alert) Like rings of a tree, each tusk layer records another page of the mammoth's life, written in the language of atoms.

To decipher this diary, University of Alaska paleoecologist Matthew Wooller, Druckenmiller, and colleagues used ~340,000 measurements of strontium isotopes that the ancient mammoth incorporated into its tusks from food and the environment.

Unique ratios between the isotopes of strontium (87Sr/86Sr) provide fingerprints of locations that change little across the millennia, the researchers explain. Alaskan isotope location data has been mapped from the teeth of rodents that generally stay in one location their entire life.

Comparing the mammoth's strontium and oxygen isotope data to this map, the researchers were able to obtain information on the mammoth's movements, down to the incredible resolution of a week.
…
The mammoth seems to have frequented different areas during different stages of its life. The 10 cm (approx. 4 inch) tusk tip shows it spent the first year of its life in the Yukon River basin in interior Alaska, moving very little.

Archaeologists have analysed DNA found in the remains of a woman who died 7,200 years ago in Indonesia - challenging previous theories around the migration of early humans.

The remains of the teenager, nicknamed Besse, were discovered in the Leang Panninge cave on Sulawesi in 2015.

It is believed to be the first time ancient human DNA has been discovered in Wallacea, a group of islands between mainland Asia and Australia.
Archaeologists excavate at Leang Panninge cave on Sulawesi. Pic: Leang Panninge Research Project

But the discovery of Besse suggests people with East Asian genes may have been there long before that.

https://news.sky.com/story/ancient-woma ... s-12391892
“People assume that time is a strict progression of cause to effect, but *actually* from a non-linear, non-subjective viewpoint - it's more like a big ball of wibbly wobbly... time-y wimey... stuff.” - Steven Moffat
Top


From the medieval fashion for pointy shoes to Victorian waist-squeezing corsets and modern furry onesies, what we wear is a window to our past.

Now researchers say they have found some of the earliest evidence of humans using clothing in a cave in Morocco, with the discovery of bone tools and bones from skinned animals suggesting the practice dates back at least 120,000 years.

Dr Emily Hallett, of the Max Planck Institute for the Science of Human History in Germany, the first author of the study, said the work reinforced the view that early humans in Africa were innovative and resourceful.
An exhibit shows the life of a neanderthal family in the Neanderthal Museum in Krapina, Croatia
Who invented clothes? A Palaeolithic archaeologist answers
Read more

“Our study adds another piece to the long list of hallmark human behaviours that begin to appear in the archaeological record of Africa around 100,000 years ago,” she said.