by wjfox
General news, articles and discussions regarding the early modern period, which followed the Middle Ages and preceded the modern era.

During this period, improvements in mapping and ship design brought faster travel and increased colonialism, opening up the New World and other regions. Feudalism declined in Europe, as the Age of Enlightenment saw adoption of the scientific method and the advance of ideals such as liberty and progress. Mercantilism paved the way to capitalism and industrialisation. 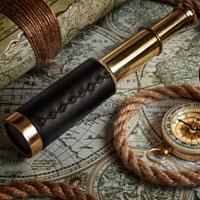 Ending scene from Apocalypto (2006). From Wikipedia:

"According to the DVD commentary track by Mel Gibson and Farhad Safinia, the ending of the film was meant to depict the first contact between the Spaniards and Mayas that took place in 1511 when Pedro de Alvarado arrived on the coast of the Yucatán and Guatemala, and also during the fourth voyage of Christopher Columbus in 1502."

The Gin Craze was a period in the first half of the 18th century when the consumption of gin increased rapidly in Great Britain, especially in London. Daniel Defoe commented: "the Distillers have found out a way to hit the palate of the Poor, by their new fashion'd compound Waters called Geneva, so that the common People seem not to value the French-brandy as usual, and even not to desire it".

Parliament passed five major Acts, in 1729, 1736, 1743, 1747 and 1751, designed to control the consumption of gin. Though many similar drinks were available and alcohol consumption was considerable at all levels of society, gin caused the greatest public concern. Although it is commonly thought gin or Jenever was the singular drink, "gin" was a blanket statement for all grain-based alcohols at the time.

The original St Paul's Cathedral ("Old St Paul's"), which lasted from 1314 until its destruction in the Great Fire of London in 1666.

With a spire of 149 metres (489 ft), it would almost meet the technical definition of a skyscraper if built today.