The Rapid Response Team is a group of volunteer officers who respond to civil disobedience, demonstrations, and riots.

Tuesday, a member of the team was charged with assault for actions during an August 18, 2020 riot in Southeast Portland.

Wednesday, Portland Police Association Executive Director, Daryl Turner told the Lars Larson Show that he feared officers would quit in response to what he called a “Witch Hunt” of a prosecution. In its own investigation the Portland Police Bureau determined no wrongdoing by the officer. He did not violate training or department rules. He did his job within the scope of the law.

At the same time murder is up 800% in Portland and it is becoming unlivable. I use to live in this city and I am glad I don't anymore. It is truly sad what these elected leaders are doing to our cities. Treasonous. Even if Antifa was a right wing group I'd want them to pay. I don't care rather you're right or left you don't have a right to do what they're doing. There comes a point where you have to drop the political bs and admit that you're fucking up your home and destroying your standard of living.
Top

The U.S. Supreme Court reined in the power of patent judges on Monday, finding the lack of ability to review their decisions inconsistent with their status as “inferior officers” under the Constitution.

Written by Chief Justice John Roberts, the ruling spells an overhaul of the U.S. patent regime. The majority ruling finds that the decisions of some 250 administrative patent judges will have to be reviewable by the director of the United States Patent and Trademark Office in order to pass constitutional muster under the Appointments Clause.

As Chief Justice Roberts noted in the ruling, a single patent ruling can have multibillion-dollar ripples.

I wouldn't even call him a Democrat. He's basically a DINO.

Even Fox News is calling him out –

caltrek wrote: ↑Mon Jun 07, 2021 1:42 pm While I wish he were more progressive, and/or that there were more progressive Democrats in the senate, he does serve a purpose. Without folks in the middle, the two extremes will just become more extreme. At least a genuine guy in the middle can help to point out how really extreme the GOP is becoming. Somebody needs to be out there trying to earn the trust of those who are almost totally without trust, and show who is trying to be a centrist and who is trying to be an extremist.

Face it, Manchin is totally useless. He doesn't serve any purpose. 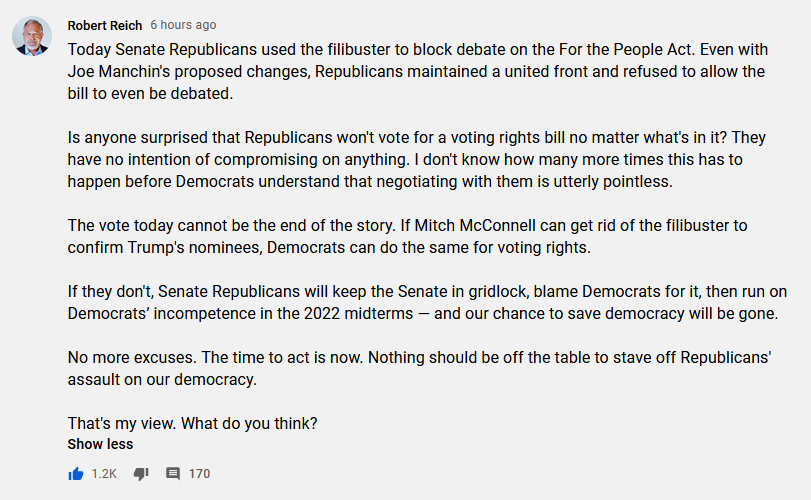 It is working just fine to date. The citation of Reich merely reinforces my point. Manchin bends over backward to try to find some middle ground with the Republicans, and they just play him for a fool. Again, this reveals how totally extreme the Republicans have become, something that Reich points out to great effect. Without Manchin, it just comes to be an argument that goes something like "well, it is just one extreme against the other." The Republicans will still make that argument, but with less credibility. So, some of the more moderate Republicans, if there is such a thing, can peel off and ally themselves with Manchin or some "centrist" variation, or they can just stick to their extreme obstructionist position and reveal themselves (again) to be enemies of democracy. Indeed enemies of the entire ecosystem in which we live and upon which we depend.

The Republicans know they are on the losing end of that argument. So, they are just going to go for outright theft within the electoral process. Hopefully, they will overplay their hand and lose in a big way in upcoming elections. There is a real danger that they will win through success in voter suppression and theft. So Manchin will ultimately have to either produce some Republican votes for his middle position, or throw in the towel and align himself more thoroughly with the Democrats (or less likely the Republicans). The bad part is that running out the clock benefits the Republicans. So Manchin and Biden are going to need to strike a balance between efforts at bipartisan discussion and acting while they still have the votes to do something.
Top


NEW YORK – The polls have closed in the Big Apple as New Yorkers voted Tuesday to pick their next mayor, but, with the city's new ranked choice voting system, don't expect to know the winner tonight.

Brooklyn Borough President and former police captain Eric Adams was leading Tuesday in partial results released in the New York City mayoral primary, but only the first choice preferences of early and in-person votes were being released for now.

With more than 96% of those votes counted, Adams had 31% of first-choice votes; former counsel to Mayor Bill de Blasio Maya Wiley was in second with 22%; and former sanitation department head Kathryn Garcia and entrepreneur turned political hopeful Andrew Yang trailed in third and fourth with about 20% and 12%, respectively.

Yang, who was once considered Adams' toughest competition in the race, conceded Tuesday night based on the initial return. "I am not going to be the next mayor of New York City," he said.

A two-year agreement that has suspended the debt ceiling expires after July 31, at which point the Treasury would take what it calls extraordinary measures to keep paying the government’s bills. In the past, the Treasury’s extraordinary measures have provided a cushion of several months, but massive spending on Covid relief programs has muddied the financial picture. Speaking to a Senate subcommittee, Yellen said the government could run out of money at some point in August, possibly when Congress is out of town on its summer recess.

“I believe it would precipitate a financial crisis, it would threaten the jobs and savings of Americans, and at a time when we're still recovering from the COVID pandemic,” Yellen said of a default.

“I would plead with Congress simply to protect the full faith and credit of the United States by acting to raise or suspend the debt limit as soon as possible.”


Average life expectancy in the United States plummeted in 2020, widening the life expectancy gap between the U.S. and other high-income countries. The decline was particularly sharp among Hispanic and Black Americans, a new study found. Health experts anticipated life expectancy would drop during the pandemic, but how much it did came as a surprise.

“I naively thought the pandemic would not make a big difference in the gap because my thinking was that it’s a global pandemic, so every country is going to take a hit,” said Steven Woolf, director emeritus of the Center on Society and Health at Virginia Commonwealth University, who led the new study. “What I didn’t anticipate was how badly the U.S. would handle the pandemic.”

The new study used data from the National Center for Health Statistics, which is part of the Centers for Disease Control and Prevention, and the Human Mortality Database to measure changes in life expectancy between 2018 and 2020 among Black, white and Hispanic Americans. The available data did not allow the researchers to include Asian, Pacific Islander, American Indian and Alaska Native populations in the comparison. The results were published Wednesday in The BMJ.

Between 2018 and 2020, the decrease in average life expectancy at birth in the U.S. was roughly 1.9 years - 8.5 times the average decrease in 16 comparable countries, which was about 2.5 months. The decrease widened the gap between the U.S. and its peers to nearly 5 years, but the difference is much larger among Black and Hispanic Americans...

Not so highly developed now, as it turns out.
Top

Can't help feeling cynical that I hope it's the idiots who are dying faster than the others, so that we can move forward towards an America fit for the 21st century.
To know is essentially the same as to not to know. The only thing that occurs is entropy.
Top
Post Reply
144 posts