For the latest totals, see the AllAfrica interactive map with per-country numbers. The numbers are compiled by the Center for Systems Science and Engineering (CSSE) at Johns Hopkins University (world map) using statistics from the World Health Organization and other international institutions as well as national and regional public health departments. 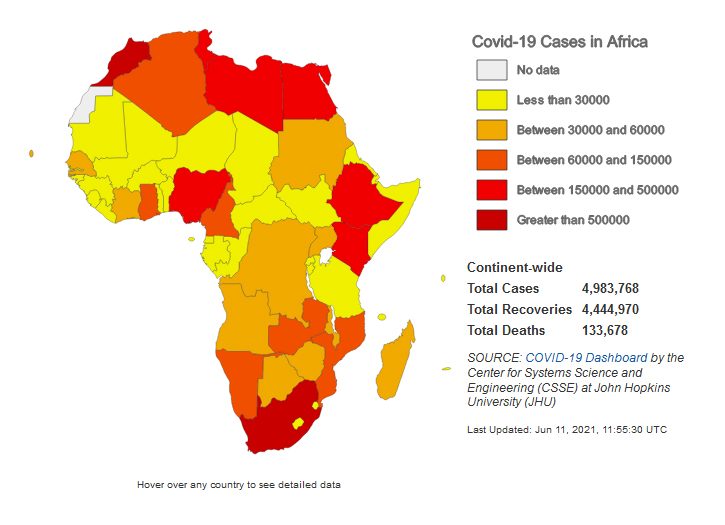 President Emmanuel Macron of France has visited Rwanda and formally recognized the role of France in the genocide against the Tutsi. In so doing he has broken with his predecessors. The genocide claimed an estimated 800K- 1 million lives and was organized by a government backed by France. President François Mitterrand was in power in France at the time of the genocide.

While in Rwanda, Macron visited Kigali Genocide Memorial, where more than 250K people are buried in mass graves. There he embraced the president of the Women’s Association of Genocide Survivors, in what was seen by many as a sign of reconciliation with those affected by the genocide.

Jean Damascene Bizimana, the executive secretary of the National Commission for the Fight against Genocide, said the visit reflects hope for the future. “It’s the symbol of new relations and respect for historic facts of the 1994 Genocide against Tutsi. In the right place, and in a televised speech at the memorial, President Macron recognized the role of France in the Genocide against Tutsi.”

In his televised address, Macron said, “France has a role, a history, and a political responsibility in Rwanda. And she has a duty: to face history and recognize the amount of suffering it has inflicted on the Rwandan people by making silence prevail over the examination of the truth for too long.” Macron added that by wanting to prevent a regional conflict or a civil war, France in effect stood alongside a genocidal regime. “By ignoring the warnings of the most lucid observers, France took on an overwhelming responsibility in a spiral that ended in the worst, even as it sought precisely to avoid it,” he said.

Rwandans and many international analysts had expected an apology from Macron, and a request for forgiveness. Instead, he said, “As I stand with humility and respect by your side today, I come to recognize the extent of our responsibilities … This journey of recognition, through our debts, our donations, offers us hope to come out of this night and walk together again. On this path, only those who have been through the night can perhaps forgive, give us the gift of forgiving ourselves.”

by Time_Traveller
Time to bring back the Africa News and Discussions thread from the previous forum, please put all African related News within it. 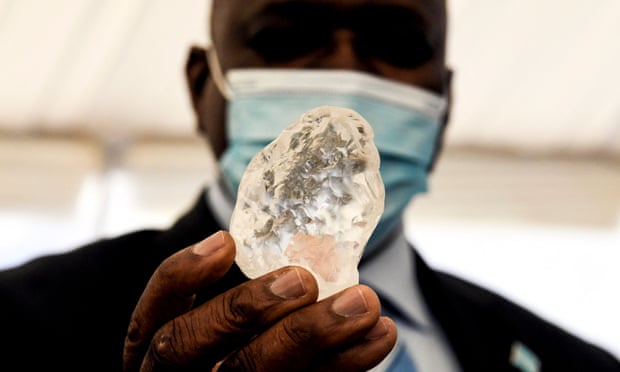 The diamond firm Debswana has announced the discovery in Botswana of a 1,098-carat stone that it described as the third largest of its kind in the world.

The company showed the stone, which was found on 1 June, to the country’s president, Mokgweetsi Masisi, in the capital Gaborone.

“It is believed to be the third largest gem-quality find in the world,” said Debswana’s managing director, Lynette Armstrong.

The “rare and extraordinary stone ... means so much in the context of diamonds and Botswana,” she said. “It brings hope to a nation that is struggling.”

It is also the biggest stone of gem quality to be discovered in the history of the company, a joint venture between the government and the global diamond giant De Beers.

Gabon has become the first African country to receive payment for reducing carbon emissions by protecting its rainforest.

Nearly 90% of Gabon is covered by forest, which captures more carbon than the country emits.

Rainforests are vital for absorbing the globe's climate-heating emissions.

Gabon has been able to show that it managed to reduce deforestation and so lower its carbon emissions in 2016 and 2017 compared to the previous decade, Cafi says.

As a result Norway, through Cafi, has paid Gabon $17m based on a formula relating to the number of tonnes of carbon that would otherwise have been released. The rest of the $150m should be handed over in the coming years.

JOHANNESBURG — South Africa’s highest court on Tuesday ordered the imprisonment of Jacob Zuma, the country’s former president, for 15 months on contempt charges, after he defied an order to appear before a corruption inquiry examining the breathtaking financial scandals that tainted his tenure as the country’s leader from 2009 to 2018.

The move to detain Mr. Zuma, a comrade of Nelson Mandela and one of the dominant figures in the governing African National Congress party since apartheid ended in 1994, was a notable development in the legacy of corruption that shadowed his years in power.

Many across the country hailed the ruling as a victory for this young democracy — a message that no one, not even a former head of state, is above the law. It could even have implications across the continent, where courts often take a back seat to powerful heads of state, said William Gumede, who leads the Democracy Works Foundation, a nonprofit focused on developing democracy in Africa.

The government in Addis Ababa described its “withdrawal” as a strategic move and said it was taken partly on humanitarian grounds, aimed at facilitating agricultural production in the mountainous region. It said the ceasefire announced on Monday would remain in place until the farming season concludes in September.

But Getachew Reda, a spokesman for Tigrayan forces, rejected the government’s ceasefire declaration as a “sick joke” and said they would not stop until they fully regain the region. Getachew further said the federal forces were forced out of Mekelle but were still fighting to recapture territory, adding that their Eritrean allies still control a “significant part” of Tigray.

Eritrea, whose troops have been accused of carrying out some of the worst abuses during the conflict, has not commented since the Ethiopian government’s announcement.

Electricity and telecommunications remain largely cut off across Tigray, making the work of humanitarian groups more challenging just as the region of some six million people faces the worst famine crisis globally in a decade.

(The National) Sheikh Mohamed bin Zayed, Crown Prince of Abu Dhabi and Deputy Supreme Commander of the Armed Forces, spoke by phone with US National Security Adviser Jake Sullivan on Wednesday to discuss the crisis in Ethiopia’s Tigray region.

Sheikh Mohamed and Mr Sullivan discussed ways of bolstering friendship and co-operation ties between the UAE and US in order to serve their mutual interests and maintain security and stability in the region, the Emirates News Agency reported.

Mr Sullivan expressed “appreciation for the United Arab Emirates’ work to promote a ceasefire and political solution” to the conflict, White House spokeswoman Emily Horne said in a statement.

Ethiopia declared a unilateral truce and withdrew its forces from Tigray earlier this week after the Tigray People’s Liberation Front took control of Mekelle, the region’s capital. (See also preceding article from Al Jazeera in this thread concerning the Ethiopian "withdrawal").

(Al Jazeera) Egypt has said it received an official notice from Ethiopia that it had started the next phase of filling a controversial huge dam on the Nile River’s main tributary, raising tensions days before an upcoming meeting of the United Nations Security Council on the issue.

In a statement late on Monday, the Egyptian irrigation ministry expressed its “firm rejection of this unilateral measure” and said the move was “a violation of international laws and norms that regulate projects built on the shared basins of international rivers”.

The Grand Ethiopian Renaissance Dam (GERD), which is set to be Africa’s largest hydroelectric project when completed, is the source of an almost decade-long diplomatic standoff between Ethiopia and downstream nations Egypt and Sudan.

Addis Ababa says the project is essential to development, but the governments in Cairo and Khartoum fear it could restrict their citizens’ water access.

There was no immediate comment by Ethiopian government officials confirming that second-phase filling had begun. But a senior water ministry official told AFP news agency it would be in line with the calendar Ethiopia has long said it would follow.

Here is more on that development, including a biographical summary of Zuma's political life and involvement in past scandals: